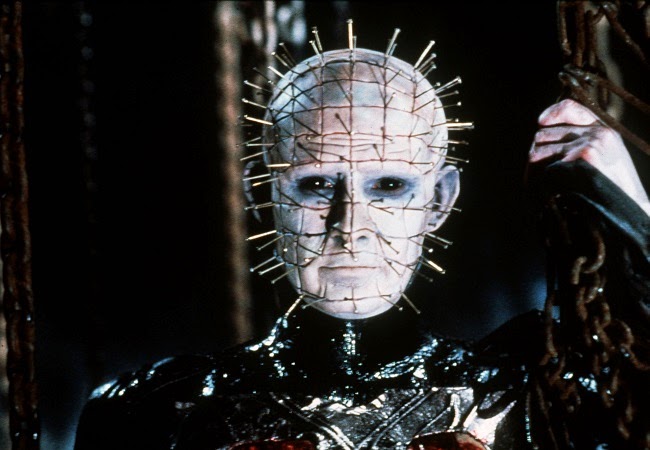 Though I can't say that the HELLRAISER franchise is one of my favorites, I must admit that the first two films are interesting transformations of the Christian concepts of hell and suffering. I have not at this time read the source-material THE HELLBOUND HEART, but going by the Wikipedia entry on it, there would seem to be few salient differences between Barker's novella and the first film, which Barker himself wrote and directed.

The sadomasochistic Cenobites soon dominated the series, with the second film emphasizing the bizarre nature of their otherworldly dimension, but in the first film, they take up very little screen-time. I could see an argument for the position that the real stars are the human characters they oppress, though I would tend to state that the Cenobites are still the "focal characters" of the first film, providing symbolic exteriorizations of the sadomasochistic vibe that binds together the obsessed lovers Frank and Julia.

Frank, disreputable brother of respectable Larry, began an affair with Larry's second wife Julia on the day that the two were wedded-- an affair informed by Julia's fascination with Frank's sadism and violence. The film's backstory is vague as to why Frank purchases a strange puzzle-box bought from a dealer in Morocco, but because he chooses to tamper with it, he's sucked into a other-dimensional world that its denizens call "hell." (In the prose story, Frank goes into the otherworld of his own free will, but regrets doing so when he learns that the inhabitants practice a sadomasochism so extreme that they cannot distinguish between pain and pleasure.) Frank dies, but without leaving a body, so that when Larry and Julia check out the house that the brothers jointly inherited, they assume that Frank's simply on the run from the law. Larry, though unaware of his wife's infidelity, expresses the feeling that he Larry is more entitled to the house than Frank. This mirrors what the resurrected Frank will believe, that he's entitled not only to Julia, but also to Kirsty, Larry's twenty-something daughter via his late first wife.

Mirror-incidents govern almost every aspect of this quasi-Freudian film. Frank injures his hand while moving his belongings up the stairs, and he happens to shed some of his blood on the exact spot where Frank died, thus forming a conduit through which Frank can re-manifest himself, albeit in a not-quite-complete body.  Julia expends precious little sympathy on Larry, making it clear that in her eyes he is the "weak brother" to Frank's "strong brother"-- just as to Kirsty, Uncle Frank will be the "bad father" she must flee, while she must try to rescue her "good father" from her bad stepmother. While Kirsty expresses no transgressive sentiments, her focus on attempting to save her father in the first two films speaks to a Freudian "rescue fantasy" with possible psychosexual undertones.

Despite the fact that the reborn Frank looks like six feet of bad road-- or like a body dragged over a bad road-- Julia is still so entranced with his animal magnetism that she agrees to commit multiple murders in order to provide Frank with human blood, so that he can regenerate his body in full. There's a slight disconnect in that Barker's script never really does show Frank fully regenerating, but then, the fact that Frank can't leave the house serves the author's purpose of keeping him tied to that location.

Kirsty walks in on one of the murders, thinking that she's simply about to catch her stepmother in an affair. Confronted by the ghoulish figure of her uncle-- who shows every sign of wanting to know her carnally-- Kirsty escapes by grabbing hold of Frank's puzzle-box and flinging it through a window. While Frank is distracted, Kirsty runs out of the house, grabs the box and runs with it, only to collapse in the street.

While recuperating at a local hospital, Kirsty manages to "solve" the box by placing its pieces in a new configuration, which happens to be the very means by which one summons the Cenobites. Though terrified by their appearances-- most of which involve variations on piercing and flesh-maiming-- Kirsty manages to strike her own deal with these "devils," offering them the chance to find Frank, who escaped their dominion. Thus "good" Kirsty unintentionally mirrors "bad" Julia's deal with Frank.

Kirsty returns to the afflicted house to look for her father, only to meet Julia, and what looks like Larry, assuring her that they joined forces to kill Frank.  But no, it's Frank the Wolf wearing the skin of Larry the Sheep, and he wants so much to make Kirsty his new pleasure-toy that he even kills off Julia first. However, the Cenobites intrude, seeking both Frank and Kirsty. They get Frank, who has one of the series' more memorable death-lines, but Kirsty manages to banish the hell-cultists back to hell with the puzzle-box.

The Cenobites provide the most memorable visuals, and their leader Pinhead (Doug Bradley) gets the best lines. Frank makes an okay villain, but his goals-- returning to humanity, boffing both his sister-in-law and his niece-- are fairly petty. Julia is no better, and I'm surprised to read that the producers of the franchise at some point considered making her the star of the series, rather than the Cenobites. In some ways it's not hard to imagine the basic plot being done, sans eviscerated demons, for one of Britain's "Thriller" TV-movie shockers, though of course with a good deal less in the "latex-and-light-show" department. I should note that this film ends with the puzzle-box being spirited away by a mysterious fellow who morphs into a dragon. This individual seems to exist just to pass the box on to new victims, though neither in this film nor the sequel is this function made explicit.

In conclusion, HELLRAISER's main virtue is that the film opens its own box, a Pandora's box of potential, with regard to the use of sadomasochism in horror films. Whether the HELLRAISER series itself fulfilled that potential is another question, to be addressed in future reviews.
Posted by Gene Phillips at 3:05 PM
Email ThisBlogThis!Share to TwitterShare to FacebookShare to Pinterest
Labels: the marvelous