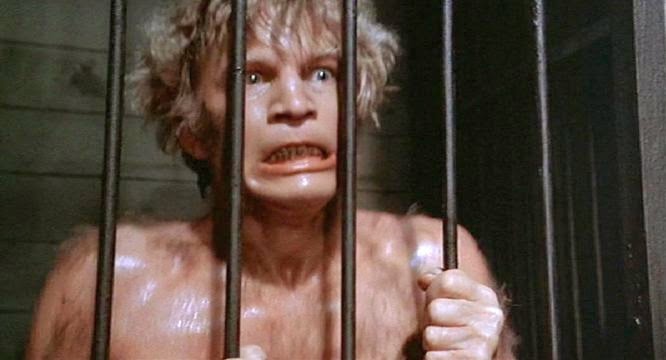 
In many ways AIP's 1977 THE ISLAND OF DOCTOR MOREAU is a better translation of the Wells source novel. In my review of the 1932 ISLAND OF LOST SOULS, I noted that Paramount ratcheted up the sex and violence for their adaptation, not to mention adding various references to the 1931 success FRANKENSTEIN.

The Doctor Moreau of the 1977 film, however, has little in the way of Frankenstein's psychological peculiarities, nor does he display the voyeuristic tendencies of the 1932 Moreau. Like the Wells character, this version of Moreau, played by Burt Lancaster, is simply a man entirely absorbed by the pursuit of one scientific goal: to eradicate the differences between animal and human by showing how one can be changed into the other.

As in other versions, the audience is introduced to Moreau via a bland "everyman" observer, though the 1977 script gives its viewpoint character Andrew Braddock (Michael York) a bit more grit than the "Parker" of the 1932 flick. Braddock is washed onto the shore of The Island with one other ship-survivor, and the other fellow almost immediately perishes, as if to goose the audience's fears for Braddock. Braddock is taken in by Moreau, his aide Montgomery, and Moreau's enigmatic house-guest Maria.  All three of them seem normal enough to Braddock, but he soon senses that the other humanoid inhabitants of the island are-- not quite human.

MOREAU's script only briefly touches on the subject that the original novel protested: animal vivisection. The 1932 film didn't really make Wells' central concept-- the physical reconstruction of animals into human beings--any more feasible than the novel did, but it did give the idea a twisted Sadean intensity. Perhaps wisely, the AIP version gives Moreau a genetic serum which is principally responsible for mutating the island's animals into humanoids.  In addition, whereas previous narrators do not become the subject of Moreau's experiments, the scientist here does decide to see how well his serum works in reverse, attempting to force Braddock to regress to animal status. The scenes in which Braddock fights to keep his humanity are easily the standout scenes of the film.

Unfortunately, though the script is more reasoned than that of the 1932 film, it's also rather dull. As in the book Moreau promulgates an imitation human society with his "manimals," attempting to force the creatures to obey an abstract, prohibitive set of laws-- but when the laws fail to control the beast-men, the film fails to dramatize this memorably. For that matter, the makeup of the beast-men lacks the touch of ghastliness needed to make them seem like proper abominations.

The script does come up with one interesting touch. In the book, Moreau is killed by one of his creations, leaving the narrator and Montgomery with the responsibility of trying to rein in the animal-people. Here, Moreau kills Montgomery, thus causing his creations to kill him specifically because he has broken his own law.  But this leads to a scene in which Braddock tries to convince that their slain ruler has risen again, as if Moreau the Old Testament God had become the risen Christ. However, the deception doesn't even come close to succeeding. And in this non-event, we see the film's greatest problem: it raises interesting ideas and then drops them, as if afraid of offending the audience.

The use of Maria is key to this trepidatious attitude. The script hints that she too may be a beast-person, probably modeled on the "panther-woman" of the 1932 film. That character, who is not modeled on anything in the novel, has become such a significant part of the Moreau-myth that it seems the writers wanted to reference her-- and yet, to the very end of the film, there's no Big Reveal disclosing that Maria is a leopard-lady. This lack of payoff may also be a consequence of producers pussyfooting around behind the scenes, trying to keep the film's "PG" rating at all costs-- even at the cost of making a more fulfilling movie.

Posted by Gene Phillips at 3:40 PM
Email ThisBlogThis!Share to TwitterShare to FacebookShare to Pinterest
Labels: the marvelous