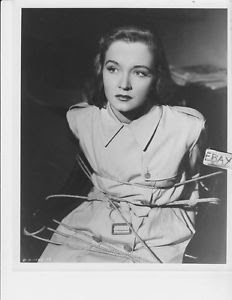 ESCAPE IN THE FOG, a modest "win-the-war" programmer, came out in the first week of April 1945, the same month that would conclude with the defeat of Germany and the suicide of Adolf Hitler. Despite being directed by Butt Boetticher, who would reap critical acclaim for his 1950s westerns, FOG is undistinguished in terms of its direction, plot and stars, though its "psychic angle" has resulted in its being included in various fantasy-film references. FOG also has the distinction of being the first metaphenomenal film written by Aubrey Wisberg, who would receive a measure of fame for 1950s SF-flicks like THE MAN FROM PLANET X and THE NEANDERTHAL MAN.

Military nurse Eileen experiences a strange dream in which she witnesses a young man attacked in the fog by a knife-armed assailant. Shortly afterward, she meets a fellow named Barry at a resort and realizes that he's the attack-ee from her dream, so she duly tells him of her premonition. Barry is surprised and a little wary, given that he is an undercover FBI agent carrying top secret documents. Eileen unfortunately reveals her strange dream to a German secret agent, but when Barry is attacked on a foggy bridge, Eileen's presentiment allows her to interfere and prevent Barry's death.

There are assorted back-and-forth thrills in this short film, but Eileen's dream is the core of the story: giving her, a civilian, the opportunity to become involved in cloak-and-dagger affairs. Neither Eileen nor Barry are very noteworthy heroes, and their villains are pretty pallid as well (where's Peter Lorre when you need him?)  The only interesting sociological aspect of the flick is that one might view Eileen's psychic talent-- which only works that one time, and without further explanation-- as an instance of "feminine intuition" being used to defeat the forces of Axis evil. 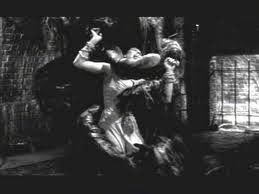 WOMANEATER, though filmed in Britain in 1958, very much resembles one of the poverty-row Monogram films of the 1940s, with less attention to motivation.

The action, if one can call it that, begins at a hunting-club in England, with two men discussing the eccentric Professor Moran. One fellow is considering accompanying Moran on a scientific trek into the Amazon Jungle, and the other fellow warns him that Moran's family suffers from a "taint" that leads to madness. This Victorian-sounding explanation for madness is about all the explanation we get as to why Moran is a mad scientist.

Moran and his expedition seek out an Amazon-Indian tribe rumored to be able to bring the dead back to life. The Englishmen witness a female native being sacrificed to the Indians' god-- though we don't see how she dies-- and one of Moran's crew is killed when he tries to stop the sacrifice. It's not clear why the Indians don't just massacre all the trespassers, but Moran not only survives, he manages to convince the tribe to participate in a sort of "cultural exchange" program.

Moran's dealing with the Indians take place offcamera, and the film jumps ahead five years, showing us that Moran has managed to bring a little bit of the jungle back with him to England. In the basement of his estate, Moran has set up a new incarnation of the tribe's god, which is a carnivorous tree with leafy "arms." Moran has also convinced a member of the tribe, one Tanga, to do double-duty as his houseservant and as an officiant of the ritual, playing his "tom-toms" while the Womaneater-tree devours its victims. The script doesn't even bother giving a reason as to why Moran thinks he can use the plant-creature's juices to come up with a cure for death itself, nor does it even waste time letting Moran exult about proving himself before the scientific community. Moran is just mad, nothing more. Since he's only interesting in extracting juices from the plant-thing, and doesn't deem it a god, one presumes that his use of Tanga is a package deal.

Moran also has a suspicious middle-aged housekeeper, Margaret, with whom he once had an affair that has since cooled, at least for Moran. Margaret is made even more suspicious when Moran starts bringing young girls around the house, though she little suspects that they're fodder for a killer plant. And she's not entirely wrong, for Moran does develop a non-experimental interest in Sally, a girl he hires to do additional housekeeping. Eventually Margaret gives Moran so much static that he strangles her-- though later he decides that she will prove the ideal test-case for his revivification serum.

Most of the film is slow and dreary, and the killings of the female victims by the patently phony tree-monster do nothing to liven things up. The ending finally sparks up a little: in short order Moran finds that his serum will bring Margaret back to life, but that she becomes a mindless creature. He reviles Tanga, who seems to take pleasure in the doctor's failure, until Moran sets the tree-thing on fire. Tanga knifes the mad scientist in the back and the film ends with him abasing himself before his dying god.

Colouris makes the most of his scenes, not least because this was one of his few starring ventures. Everyone else is largely unmemorable. The script might have been slightly improved had it been made clear that Tanga knows the doctor's ambitions will be fruitless. At last that would have given the flick an anti-colonial vibe of the sort seen in the far superior 1966 REPTILE, sort of a "see how you like it when we invade YOU!"
Posted by Gene Phillips at 2:05 PM
Email ThisBlogThis!Share to TwitterShare to FacebookShare to Pinterest
Labels: the marvelous