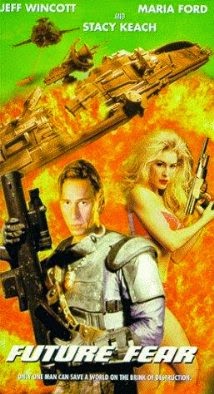 I consider myself fairly easy to please regarding B-movies and their video descendants, but my sense of charity is very nearly exhausted by FUTURE FEAR-- the sole product of one-time director Lewis Baumander, released under the umbrella of Roger Corman's Concorde-New Horizons organization. I saw it long ago on cable, remembered little about and so gave it a second viewing via YouTube.

It's axiomatic that few straight-to-video-and-cable productions are noted for originality. They're cranked out quickly, usually with heavy indebtedness to high-profile Hollywood genre-works, and usually their main virtue is offering uncomplicated thrills of sex and violence.

Baumander's FUTURE FEAR, though, doesn't even offer the most modest thrills, despite teaming up two small-time icons of home video, Maria "Angel of Destruction" Ford and Jeff "Mission of Justice" Wincott. These film-titles, of course, have meaning only for fanatics like myself, who must comb through nearly everything in search for unusual thrills. But FEAR offers no thrills, only an incoherent mess of a storyline tricked out with countless incomprehensible references to Lewis Carroll's ALICE IN WONDERLAND books.Carroll's iconic characters and situations are so enmeshed in modern pop culture that I can forgive an author for invoking them in an unoriginal manner-- but not for making them tedious.

Sometime in the future, Earth sends a probe into space. The probe comes back with a virus that lays waste to humanity-- though none of this chaos is within the film's budget.  Only one scientist is able to come up with a possible serum: Doctor John Denniel (note the similarity of the name to the famed illustrator of the Alice books, John Tenniel). To do so, though, Denniel must create a form of pseudo-life on which to run his experiments.

Denniel has no interest in using these pseudo-humans for anything but test cases. However, his ex-wife Anna-- also a lieutenant within whatever military hierarchy has survived-- nurtures an irrational desire to keep the test cases alive, because she once suffered the abortion of Denniel's child. Her commander General Wallace (Stacy Keach) orders Anna to steal from Denniel a case that holds all of his research: a case which is called "the Ark" for no good reason. I suppose the writer-director was thinking of it as a parallel to Noah's boat, rather than the ark of Indiana Jones-- though, just to confuse things, the hero does have a line where he says he's in a "poor man's Raiders of the Lost Ark flick."

Anna pursues her ex-lover via helicopter for a while, but the majority of the film has her chasing him through an unconvincing subterranean complex. Both of them spout assorted wisecracks drawn from high-profile pop culture, but Denniel hardly lets a minute go by without tossing in some reference to Lewis Carroll. The script gives no coherent reason for him to be such a Carroll nut, so it goes without saying that Baumander is working the character's mouth for him, perhaps in the mistaken impression that these continuous quotes would make the project seem more interesting.  Baumander is clearly no action-director, given that the peripatetic struggles of husband and wife are pretty tedious, even though as noted above both of the leads had experience doing martial-arts movies.

As for the character of General Wallace, he exists to interrupt the chase-scenes and rant about his secret plans: he wants to use the virus to wipe out all the world's "inferior races" and to create humanoids to his specifications. Oh, and incidentally, he's also responsible for killing Denniel's father, though this has zero impact on the plot as such. In the end Anna turns against her superior officer, and she pays the ultimate price for it. Her sacrifice moves Denniel to amend his original "no right to life" stance, though as the film closes it's no clear how he plans to do so and save the world from the virus at the same time.

This is one of the most relentlessly confused films I've ever screened, and not even in the amusing manner of Ed Wood. 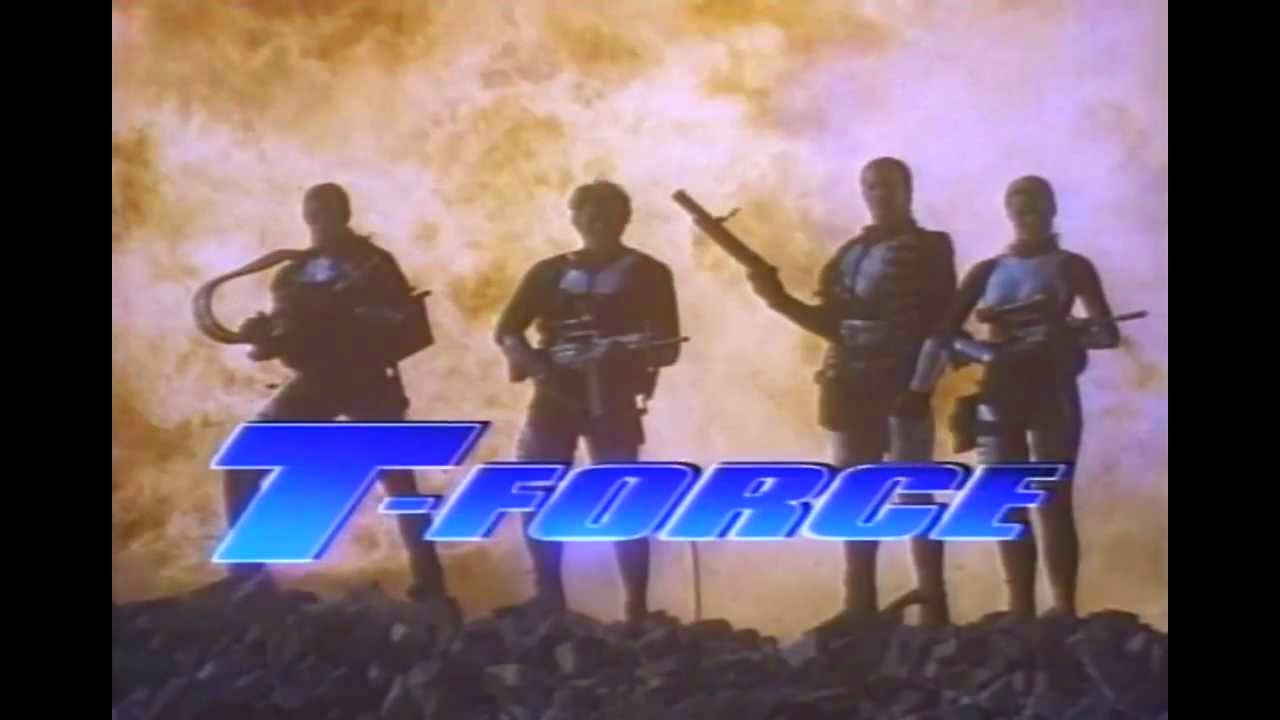 T-FORCE, however, is the sort of derivative but memorable film that makes it worthwhile to comb through piles of pop-culture detritus. No one's going to esteem it over its proximate inspiration, the TERMINATOR films, but I liked it on its own terms.

In the near future the U.S, has been using specially designed cyborgs-- called "cybernauts" in a probable eye-wink to an AVENGERS epsiode-- as servants in minor domestic roles. Idealistic scientist Doctor Gant-- played by the same fellow who oiled the parts of the Six Million Dollar Man-- perfects four intelligent cybernauts for use by the Los Angeles police department, as a SWAT-like detachment called "Terminal Force." The film opens with them getting their chance to prove themselves by terminating a cadre of hostage-taking terrorists.

Unfortunately, the cybernauts don't manage to save all the hostages. The mayor (played by Erin Gray of BUCK ROGERS fame) decides to feather her political nest by giving the order to destroy the cybernauts, despite Gant's protests.

The four cyborgs-- three males and one female-- debate whether or not the order for destruction to be in conflict with their orders to preserve their own lives.  Only one cyborg, ironically endowed with the rebellious name of Cain (Bobby Johnston), supports the right of human authorities to terminate them all. The female Mandragora and the other two males, given father-figure names like Adam and Zeus, elect to rebel, reasoning that since the kill-order makes no sense, the authority-figures must have become corrupt. Rather than simply leaving the city, they choose to stock up on assorted weapons and plan to kill both the L.A, police chief and the mayor.

The chief and many other officers are quickly snuffed out, at which point maverick cop Jack Floyd (Jack Scalia) is called in. The cops have taken Cain prisoner, but Cain, still invoking only emotionless logic, points that he alone has the power to take down his kindred. Floyd, who also happens to be a long-time robot hater (a machine took daddy's job), is forced to become partners in yet another mismatched buddy-cop opus.

Yet, for all the familiar tropes of the story, and the skillful but unexceptional action-scenarios, T-FORCE does have some winning moments. After Floyd has told his robotic partner to "kiss his ass" three times, Cain asks if this phrase connotes some forbidden sexual desire.  It's predictable enough that man and robot must and will bond, but there's an unexpectedly bittersweet conclusion, wherein Floyd manages to preserve the life of the only cybernaut who was willing to let himself be killed.

Posted by Gene Phillips at 3:01 PM
Email ThisBlogThis!Share to TwitterShare to FacebookShare to Pinterest
Labels: combative adventures, the marvelous