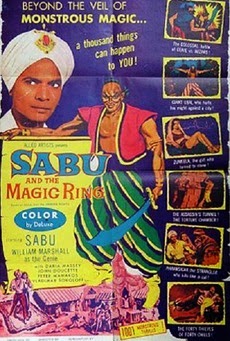 
In this review I mentioned that I saw 1961's WONDERS OF ALADDIN in my adolescence and didn't really like the film, either back then or in my re-screening. But I'll say one thing for WONDERS: at least I more or less remembered it. My film-viewing records testified that at some time in adolescence I'd seen SABU AND THE MAGIC RING, but I remembered nothing about it. And even upon re-viewing thanks to its posting on Youtube, no scene seemed at all familiar.

RING is essentially a toss-off B-picture, in which Sabu, veteran of classic Hollywood films in the 1940s, attempts to keep his career afloat, much as Johnny Weismuller did with the dime-a-dozen JUNGLE JIM flicks. Prior to this film, Sabu made a jungle film, JAGUAR, with the same director and almost the same writing-and-producing team, so SABU was designed in the same cost-conscious mode of filmmaking. Opulent "Arabian Nights" fantasies, though, are not exactly well served by small budgeted films.

The basic theme of RING is "Aladdin learns a lesson." Sabu is a penniless stable boy who, like Aladdin, is something of a layabout and a moocher, usually sponging off his sort-of girlfriend Zumila. He comes across a magic ring and finds that he can summon the hugely proportioned genie Ubal (William Marshall), who will grant him any wish-- usually limited to materializing a few petty items within the film's budget--as long as he holds the ring. Trouble is, the city's evil vizier witnesses the genie's power and wants the ring.

After that, most of the plot revolves around Sabu getting or losing the ring in some allegedly comic manner. Though Sabu is the star, and tries mightily to give his character some of the winsomeness of Abu from the classic 1940 THIEF OF BAGDAD, most of the film's best lines-- such as they are-- go to the tolerant and all-knowing Ubal.


Since RING can't deliver on opulent FX or humor, its most entertaining element are three short fight-scenes: one where the towering Ubal (given the illusion of standing about seven feet) beats a half dozen Wazir-thugs, and two for the adult Sabu, who for a stable-boy shows himself oddly adept with a cutlass. These are lively enough for me to regard SABU AND THE MAGIC RING as a combative, if not very funny, comedy.
Posted by Gene Phillips at 1:39 PM
Email ThisBlogThis!Share to TwitterShare to FacebookShare to Pinterest
Labels: combative comedies, the marvelous