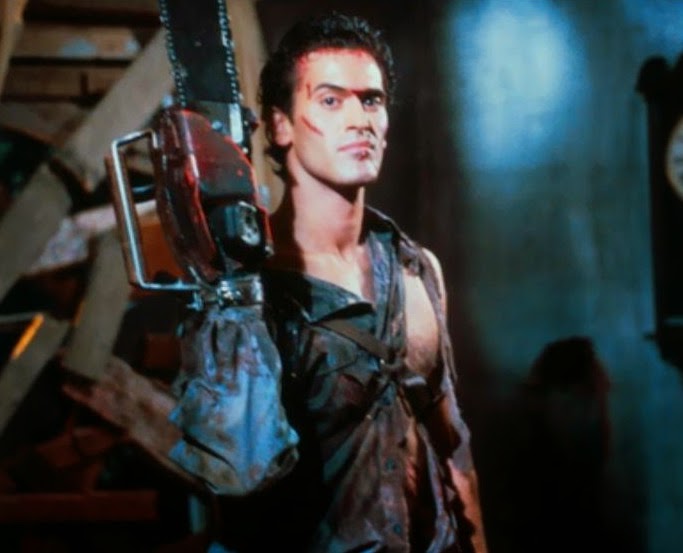 
I'll be pretty brief in my remarks on the last two installments of Sam Raimi's. I decided to re-view them largely because Ash Williams has become a cult-figure, thanks to Bruce Campbell's "balls-to-the-wall" performance. But I've never really cared for the oeuvre of Sam Raimi, though he did two really good SPIDER-MAN films and presumably had some creative input in the HERCULES and XENA TV-shows-- all of which I've enjoyed.

EVIL DEAD 2 is certainly a much better film than its precursor, and a lot of that can be credited to Raimi's decision to give Ash a more slapsticky vibe, up to and including quotes from Three Stooges routines. Still, the improvement in Ash didn't extend to any of the other characters, who were just as much throwaway cannon-fodder. It's not impossible to do a hard-hitting, gory film that allows for some in-depth characterization, as witness the recently reviewed HELLRAISER II. But in his EVIL DEAD films, Raimi pretty much throws characterization out the window.

So DEAD is moderately enjoyable whenever Ash is strutting his stuff, and not at any other time. The film's highlight is Ash's decision to fit a chainsaw onto his missing hand, which is almost as much of a grabber as his final confrontation with the main demon.  Yet, for all his bravado, Ash is still what I call a "demihero:" he's out to save himself, and maybe others if things work out that way-- but he's not yet a hero. EVIL DEAD II is always what I consider a "drama," in that the monster is arguably more the star than his opponent. ARMY OF DARKNESS charts the last phase of the Ash character, where he moves from helpless victim to empowered demihero to real hero-- though, because of rights issues, the film could not utilize the "Evil Dead" franchise-name.

The encounter with the demon at the end of DEAD 2 propels Ash back in time to the Middle Ages, which is also menaced by the "Deadites" of the first two films. Somewhat refreshingly, Ash remains a jerk for the first half of the film: he's concerned only with getting back to his time and could care less about the problems of the locals.

I said that Ash becomes a "real hero" by the end of ARMY, but I must qualify this. The climax does have him take arms against a sea of Deadites, return to his own time and take out another monster during the coda. However, Raimi's original conclusion was going to reduce Ash to a blundering fool again, by having him fall into a protracted sleep so that he woke up in a post-apocalyptic future.  Perhaps that's why I've never liked a lot of Raimi's stuff; no appreciation for consistency of tone. Sometimes this works well for him, when he chances upon a good "what the hell" moment-- but at other times, he seems to resort to "tone-changing" for no reason but creative indecision.

I've not yet viewed the EVIL DEAD remake, but this of course doesn't belong to the original mythos as such.
Posted by Gene Phillips at 2:49 PM
Email ThisBlogThis!Share to TwitterShare to FacebookShare to Pinterest
Labels: combative adventures, combative dramas, the marvelous