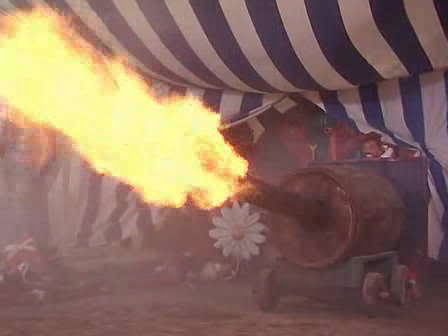 
Though I've reviewed other films belonging to genres that only rarely feature uncanny metaphenomenal content, THE CRIMSON PIRATE is definitely my first uncanny pirate-film-- though I have touched on a few uncanny swashbucklers here and there.

In this case the metaphenomenal functions only to add to CRIMSON's spectacle, consisting of three or four uncanny inventions that don't belong in the eighteenth century setting, including a hot-air balloon, an explosive that may be nitroglycerine, a gatling gun, a flamethrower, and a wooden submarine, all the creations of scientific genius Professor Prudence. Of these, I wouldn't consider the balloon outré enough to move CRIMSON into the realm of the uncanny, but the others qualify, given that they are inventions appearing out of their proper time and space.

Still, the major spectacle of CRIMSON is the body of heroic red-garbed pirate Captain Valo (Burt Lancaster), forever vaulting and swinging and fighting so as to show off his acrobatic skills, often in tandem with his mute partner Ojo (Nick Cravat). Lancaster and Cravat learned their acrobatics as youths in the circus, and this was the second film, following the 1950 swashbuckler THE FLAME AND THE ARROW, to showcase their physical talents. Indeed, there's so much emphasis on the spectacle of half-naked bodies that CRIMSON may be the first pirate-film in which the hero employs neither gun nor blade.  Valo and Ojo only occasionally pick up "found weapons" and clobber their enemies with them, but their preferred method of attack is derived from the Batman-and-Robin school of wading into seas of armed men, using nothing but fists and feet.

In contrast to the pirate epics of the 1930s and 1940s, CRIMSON barely references the history of any particular period. Nor are the opposed parties well defined, though most of them seem to be Englishmen. In the course of hijacking a ship, Valo meets the ruthless Baron Gruda, an emissary sent by a monarch known only as "the King." Gruda has been sent to put down a rebellion on the fictional island of "Cobra." Vallo, out for profits like most pirates, tells Gruda that for the right amount of money he'll find and deliver up "El Libre," the leader of the rebel forces.

It will come to no one's surprise that when Valo and Ojo infiltrate the rebel forces, Valo meets a gorgeous young woman, Consuelo (Eva Bartok), who happens to be the daughter of El Libre. Valo falls for Consuelo and eventually turns against Gruda and his army.

According to Wikipedia the original script by accused Communist Waldo Salt was entirely serious, and there are still traces of a revolutionary theme in CRIMSON, particularly when Valo reflects that the new inventions of Professor Prudence can be used against "the weapons of the old regime."  However, the refurbished script and Robert Siodmak's direction produced one of the most tongue-in-cheek pirate epics of all time, yet not one in which the humor overpowers the adventure-elements. It's no more than a minor classic, but remains essential viewing for lovers of pirate-cinema.

Posted by Gene Phillips at 3:33 PM
Email ThisBlogThis!Share to TwitterShare to FacebookShare to Pinterest
Labels: combative adventures, diabolical devices (u), the uncanny