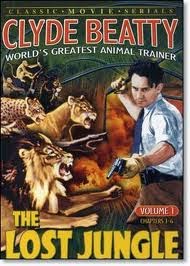 
Time proves an ironic master. Often, as in the case of these two serials, the "gimmick" being used to sell them to one generation may prove of minimal interest to later audiences.

It's perfectly understandable that since these serials were presenting the fictionalized adventures of real-life lion-tamer Clyde Beatty, the Beatty character should therefore spend huge amounts of time in both serials taming lions, or tigers, or better yet, both of them together, since a lion-and-tiger act was one of Beatty's real-life specialties. But for modern audiences, these are likely to be a tough slog.

Of the two serials featuring Fictional-Beatty as a daredevil hero, LOST JUNGLE-- one of the last serials produced by Mascot Studios before it was mostly absorbed by Republic-- is the better of the two. To be sure, the charisma Beatty imposed over his trained animals doesn't come across through the camera's lens: he seems ill-at-ease before the camera much of the time-- though for some viewers this might be preferable to the dime-a-dozen "stalwart leading man" types that infested most serials. Oddly, in comparison to most romance-free action-serials, Beatty is made to look a little more human thanks to the ardent attention of his girlfriend Ruth (Cecilia Parker, who's a much better actor than Beatty). The two of them can't seem to get on the same page regarding their romantic status, and Ruth's father presses the issue even more by taking Ruth with him on a ship bound to investigate a mysterious island in the South Pacific.  Beatty receives word that the ship has been wrecked on the island and he mounts a rescue expedition via dirigible-- though, just to keep the circus-theme going, he also decides that he's going to capture as many animals from the island as he can take back with him.

For good measure, Beatty further highlights his naivete about human nature by including in the rescue-party one Sharkey. In our first look at Sharkey we're given an anti-Beatty, for he's a trainer who beats his animals maliciously, and this forces the hero to deal out a Beatty-beatdown. Naturally, Sharkey plots to trip Beatty up whenever he can.

The island is host to two uncanny presences. One is an uninhabited "lost city," name of Kamor, which still has a few traps for the unwary, like a thriving pit of crocodiles. The other is that somehow the island plays host to numerous wild beasts not native to the South Pacific, particularly-- you guessed it-- lions and tigers. The script does not attempt to explain the beasts' provenance or the city's emptiness, and together these factors give the setting an uncanny phenomenality comparable to that of many other jungle pictures examined on this blog.  LOST JUNGLE is a moderately entertaining series of thinly plotted jungle thrills, though recommended only for viewers in the mood for this sort of thing. 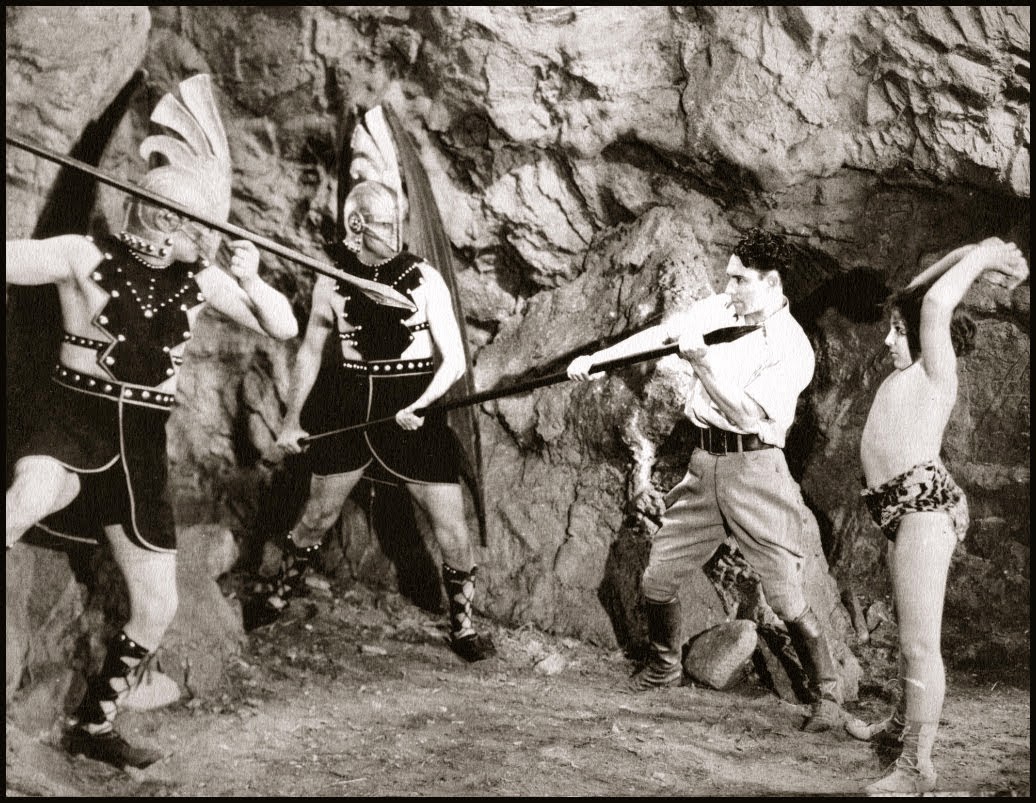 By contrast, DARKEST AFRICA is a serial that tries to do too many things and does none of them well. The serial's primary claim to fame these days is that Beatty's antagonists include a cadre of warriors called "Batmen," and thus the serial has as good a claim as several other sources as a possible inspiration for the name of the DC Comics Batman.

Apparently when Republic bought some or all of Mascot's properties, they decided to give the lion-taming adventure-hero a second outing. Possibly a script had already been produced at Mascot; only one creative talent made the jump from JUNGLE to AFRICA, a writer named John Rathmell.  Still, no matter how much or how little Rathmell contributed to both pictures, they share a similar disinterest in providing a rationale for their weird settings. But while JUNGLE didn't need much explanation, AFRICA really does-- and it doesn't have any to offer.

The title is one of the weirdest aspects of the film, invoking racial myths rather covertly. There aren't many scenes with Black African natives, but in a sense one of the most common race-myths associated with them-- that Black Africans will fall all over themselves for a Blonde Goddess-- is transferred from native tribes to the white inhabitants of the bizarre lost city of Joba.

The plot gets started when animal-trainer Beatty-- ostensibly the same character as in JUNGLE, though with no Ruth in sight-- meets a jungle boy named Baru (Manuel King, billed as an animal trainer in his own right). Baru is said to have been raised in the jungle, and he's even bonded to an obedient gorilla-servant, Bonga (Crash Corrigan). Yet he has an adult sister named Valerie Tremaine, presumably from either Europe or America, and there's absolutely no explanation of how the two of them, presumably separated at some earlier time, came together. Nor does Baru explain how he and Valerie came to investigate lost Joba; only that Valerie was taken hostage by the city 's evil high priest Dagna. Baru wants someone to help him go rescue his sister, and Beatty agrees to do so, taking a small party of travelers that includes two mercenary diamond-hunters and an American black comic-relief named Hambone (Ray Turner).

The camera's side-trips to Joba inform the audience that the city seems to lack any secular authority at all. Dagna wants to promote Valerie as "the Goddess of the Golden Bat" to the rarely seen populace of the city, but it's not clear why he needs her. He seems to wield complete authority over the Batmen, a troop of men who can fly through the skies on artificial bat-wings, so one wonders why he doesn't just seize power outright. Perhaps he thinks that the populace is so religious that only a "blonde goddess" can gain their approval, though the script doesn't give any reason as to why the Jobans would associate blonde girls with some primeval bat-deity. Additionally, Joba boasts no other technology save whatever principle allows the Batmen to fly on their unconvincing wings. I suspect that the real impetus for the Batmen was the similarly accoutered "Hawkmen" in Universal Studios' serial adaptation of FLASH GORDON. If so, the producers of AFRICA jumped on the bandwagon before it started, as both serials came out in February 1936.

The mockup for the city of Joba looks good, and the Batmen's flying scenes are moderately impressive. Unfortunately, the goal of freeing Valerie is so limited that the script must keep finding contrivances to put obstacles in the way of Beatty and his allies. Beatty, Baru and Valerie are as one-dimensional as heroes as Dagna and the two diamond-hunters are as villains. Frankly, only two characters work very well-- and one of them is Bonga the Gorilla.

Hambone the comedy relief is no better or worse than most characters of his type. His first big scene comes when he's waylaid by a tribe of Black Africans who don't know what to make of him. When the local witch doctor demonstrates his penny-ante fake magic before Hambone, the goof tries to one-up the magician-- and only dumb luck keeps Hambone out of a tiger pit. Turner also performs some nice comic pratfalls when he's captured in Joba. Strangely, the script throws out a stray plot-line in which Dagna invites Hambone to use his "magic" to bring to life some long dead historical figure-- and then nothing comes of the plot-thread. Maybe this was another subconscious identification between the fictional white Jobans and real Black Africans, standing in for the supposed superstitious credulity of the latter?
Posted by Gene Phillips at 3:51 PM
Email ThisBlogThis!Share to TwitterShare to FacebookShare to Pinterest
Labels: combative adventures, exotic lands and customs (u), the marvelous, the uncanny