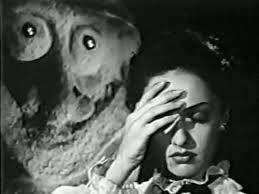 
Though I read Herman Melville's novel OMOO-- sequel to his bestseller TYPEE-- back in college, I remember nothing about it, except that said sequel also involved Polynesian culture. Even without any clear recolletions, though, I doubt that Leon Leonard's film really has anything more than that in common with the Melville novel. A quick quote from the author at the film's beginning is probably the only Melville work here.

OMOO OMOO is nothing but a cheapjack take on a popular trope in horror fiction: a curse that results when Western unbelievers pilfer the treasures of a pagan idol. As the film begins, this theft has already taken place, possibly by one Bardette, captain of a European ship. His ship is returning "to the scene of the crime" as it were because Bardette has become deathly ill, and he seeks to recover the pearls of a Polynesian idol and return them to their rightful place. It was never clear to me whether or not Bardette himself stole the pearls or simply knew that one of his crew did so. It's also not clear whether or not there is a real supernatural curse at work, for at one point a Polynesian holy man comes aboard the ship and essentially heals the captain with his techniques. Again, since it's not clear that the shaman is using magic or psychology, I can't really say that he's a source of marvels either. When the story's villain is slain, it's through the mundane means of a Bengal tiger.

There's really just one distinction about OMOO OMOO. Whereas Hollywood made reams of naturalistic films about the Edenic pleasures of Polynesia, this is one of the few that dwells on the islanders' exoticism to the extent that the film moves into the domain of the uncanny. The presence of the pearl-eyed "shark god" is the main source of the uncanny exoticism, even if there's no proof that either the god or the film named after him have any power-- except the power to make viewers wonder why anyone would choose to reference a Melville novel that no one reads any more.
Posted by Gene Phillips at 2:46 PM
Email ThisBlogThis!Share to TwitterShare to FacebookShare to Pinterest
Labels: exotic lands and customs (u), the uncanny