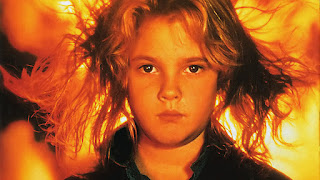 
FIRESTARTER the novel was published roughly six years after CARRIE, the book that made Stephen King a bestseller celebrity. When I recently reread the 1980 book, I thought of it as "CARRIE lite"-- not in terms of its seriousness, but in terms of its symbolic richness. CARRIE remains a deep exploration of feminine fears and anxieties, given mythic resonance by its combination of an "ugly duckling" story with one of Poe-esque vengeance. FIRESTARTER's grade-school heroine Charlie McGee, however, read to me as a flat, uninteresting character. Her whole reason for being is simply her anxiety over using her fire-kindling power to defend herself and her father against the manipulative agents of the evil "Shop." The anxiety is formed at a younger age, when she almost burns her mother with a careless use of her power, and from then on, little Charlie is largely defined by her reluctance to use her power again. Further, it seemed to me that King was actually more interested in the chief villain of the story; John Rainbird, a Cherokee Shop-agent who cherishes the desire to kill the young psychic and spiritually take his power for his own after death. Still, though Rainbird has more symbolic depth than Charlie, he isn't much better realized.

The 1984 film, directed Mark L, Lester, is probably one of the more faithful adaptations of a King work-- and this may be because the original novel lacks a lot of the deeper psychological issues found in the best Stephen King prose. Most films are, by their nature, forced to leave out many of the subtler details of prose works, partly for reasons of time, partly due to the cinema's general inability to "go into the heads" of characters. But since King didn't put much into the heads of his novel's characters, I didn't feel the lack, as I did, say, with the adaptation of DEAD ZONE.

Lester and his FX-team do an admirable job with the fires and explosions, and young Drew Barrymore's intensity enlivens the static character of Charlie. The script minimizes Rainbird's Native American associations, so it seems that his desire to kill Charlie is no more than a strange fetish. The other actors turn in decent if unexceptional work.

Posted by Gene Phillips at 2:24 PM
Email ThisBlogThis!Share to TwitterShare to FacebookShare to Pinterest
Labels: combative dramas, the marvelous