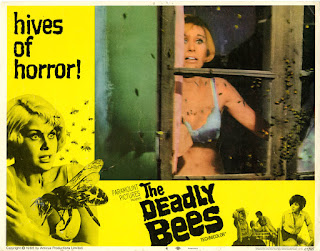 
I've not read the novel on which THE DEADLY BEES was based, but Wikipedia asserts that the original shooting script by Robert Bloch was greatly modified during the film's troubled production. What emerges is a rather low-wattage thriller, perhaps noteworthy only for being one of the first "killer bee" movies, a subgenre that really took off in the 1970s.

One of the film's story problems is attempting to generate a "whodunnit" as to the identity of the person unleashing a strain of killer bees upon a small English town. Given that there are only two suspects, obviously one is the red herring and the other is supposed to be the less likely suspect, but the flaccid quality of the "mystery" results in nothing beyond a lot of shots of viewpoint character Vicki (Suzannah Leigh) meandering about trying to find clues.

Leigh is appealing enough, but her character is grossly underwritten, even though there's potential in the fact that she's a big-time singer who's come to the English countryside to get away from the big-city noise. But she's a cipher next to Bloch's archetypal heroine Marion Crane, or even Carol Harbin from 1964's STRAIT-JACKET. Nor do the local bee-fanciers manage to communicate to the audience any sound reasons for their fascination with bees.

The original game-plan for the film was to team Christopher Lee and Boris Karloff as the two antagonistic apiologists, but that bit of casting fell through. The presence of stars might have helped the film at the box office, but it wouldn't have improved the film's marked lack of tension and its inability to mount impressive bee-attacks on its low budget.

DEADLY BEES is an adequate time-killer, but nothing more.

Posted by Gene Phillips at 3:35 PM
Email ThisBlogThis!Share to TwitterShare to FacebookShare to Pinterest
Labels: astounding animals (u), the uncanny