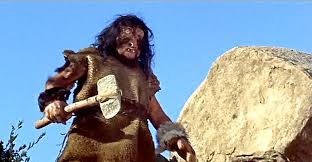 Short version: four 1950s-era male astronauts travel into space, get hit with a storm that sends them into Earth's future, and are able to bring about "the rebirth of the human race" thanks to good old American know-how.

I've commented that with some of the "giant monster" films of the 1950s decade-- particularly the highly influential BEAST FROM 20,000 FATHOMS--  there's not much of a cautionary moral with respect to the dangers of nuclear power: rather, films of this type seem "to side with the notion of modern progress against all other considerations." Such is the case with the four heroes of WORLD WITHOUT END, with respect to their witnessing the results of a nuclear apocalypse. Taylor of 1968's PLANET OF THE APES is memorably anguished by the revelation of man's self-destructive deed, but writer-director Edward Bernds doesn't have the astronauts display more than mild consternation at the apocalypse. But perhaps there's a good reason for this reluctance to toss brickbats at The Bomb. After all, in BEAST FROM 20,000 FATHOMS, modern-day humans are validated when their ingenuity makes it possible for them to slay a great dragon of the past. Many fictional "after the Bomb" stories have taken a similar tack: the catastrophe isn't an occasion for tragic chest-beatings, but an opportunity to remake the world according to one's preferences. Bernds is definitely in this category, for by the end of the film the shipwrecked astronauts have become the de facto rulers of the reborn world, which unites formerly warring factions under a banner of an armed peace.

Of the handful of SF-films Bernds worked on in the 1950s, WORLD is certainly the closest to being good SF-drama. Having astronauts travel in time to a future-Earth via "time dilation" anticipates the central idea of the APES film, which may well have borrowed said idea from Bernds' film, since no similar time-travel occurs in the APES source-novel. Yet it should be noted that Bernds almost certainly borrowed his basic time-travel concept from Wells' TIME MACHINE, as well as populating his post-apocalyptic world with loose derivations of both "the Morlocks" (Bernds' one-eyed "mutates") and "the Eloi" (Bernds' pacifist "underworlders," as I call them, given that they live beneath the earth and refuse to explore their post-apocalyptic world).

Bernds does ring in some significant changes. In contrast to Wells' scenario, there's no relationship of dependence between the savage mutates and the somewhat over-civilized "underworlders."The script also strongly suggests that the mutates are a temporary aberration that will decline as postwar radiation continues to diminish. The underworlders are the film's main problem, and one might almost imagine them as the extrapolation of a "bomb shelter" culture, though Bernds' script does not explicitly say so. While the male underworlders are not as willowy as the Eloi, they are mostly played by flabby or otherwise unattractive actors, in contrast to the most prominent female underworlders, all of whom are played by gorgeous starlets. This bit of casting falls into line with the judgments of the four castaways, who repeatedly emphasize that the human race was not meant to live "in a hole in the ground." The Americans' verdict is backed up by the fact that most of the men haven't been spawning children lately, adding up to the equation: "male inaction = lack of viirility." Did Bernds choose to believe that female fertility wouldn't be affected by the underground life-style because females were naturally inactive, or because they were closer to the world of womb and cave by nature? The world will never know, for the script never deals with this inconsistency. Yet it's more than evident that the underworlder-women are sexually eager, and even a crewman who admits being on the wrong side of fifty gets his share of attention.  This, in addition to the fantasy of ruling a new world, is the other major perk of nuclear apocalypse. It should be noted, however, that Jaffe, the only married astronaut, doesn't definitely hook up with anyone in the future-world, even though his wife and children are long dead. He's last seen dispensing grade-school education to young underworlders and mutates, perhaps suggesting that he still considers himself a married man and can only satisfy his familial needs through the role of teaching the children of others.

The sociological politics of Bernds' apocalypse bear a strong resemblance to the ideals of imperialism. The Americans of the new world, like those of the old, must coax older and more decadent cultures to take up arms, and when necessary use violence themselves to put down the rebellions of savage hordes. Still, at least Bernds' mock-Eloi are allowed to voice the critiques of warring mankind that the astronauts will not voice, and it's possible to read WORLD as a response to the end of George Pal's version of TIME MACHINE: "well, what if the Eloi don't WANT the time-traveler to change them?" Nevertheless, the astronauts' most vociferous critic is motivated by jealousy when the underworlder-girl he likes goes gaga over a more beefy American. So I can't say Bernds allows for very much in the way of opposing sentiment.

In the film's first thirty minutes, shortly after the astronauts begin to explore the world on which they've crash-landed, one of them jokes to the others that he expects to see green Venusians with their space-blasters. This was a clever way for Bernds to mock the vision of SF as "Buck Rogers stuff," and perhaps to make audiences invest belief in the characters-- even though their first adventure on future-Earth has them attacked by giant mutant spiders, a virtual staple of the space-opera subgenre. The conclusion is also very much in the realm of science-fantasy, for in order for the astronauts to overcome the savages, their leader Borden must fight the mutates' leader in single combat. I'd like to say that Bernds pulls off this final battle with aplomb, but it's a fairly blah sequence. Thus I can't deem WORLD a film in the "combative mode" even though said film concludes with a fight-scene. In fact, if there's any single reason that WORLD doesn't have a better reputation with fans of 1950s SF-films, it may be that the four astronaut characters are exceedingly dull, and are almost indistinguishable from one another despite the differences in their backstories.

Posted by Gene Phillips at 3:48 PM
Email ThisBlogThis!Share to TwitterShare to FacebookShare to Pinterest
Labels: the marvelous