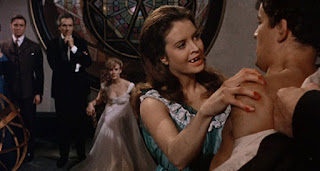 KISS OF THE VAMPIRE wasn't by any means the last time Hammer tried to put out a vampire movie without Christopher Lee, but it was the last vamp-film for producer Anthony Hinds, who sat in the producer's chair for the film that started the company's mix of fangs and cleavage, HORROR OF DRACULA. Hinds had also helmed BRIDES OF DRACULA, the company's most memorable attempt to make a Lee-less vampire-film, and it's common knowledge in horror-fandom that part of KISS was recycled from BRIDES. The story goes that BRIDES' original script was set up to have vampire hunter Van Helsing destroy the Meinster cultus by unleashing on them a horde of killer bats conjured via black magic. BRIDES reigning star Peter Cushing didn't think that his Van Helsing would muck about with magic, so a new-- and arguably better-- climax was devised for BRIDES. However, someone in the Hammer hierarchy, possibly Hinds, decided to use the discarded ending for the next vampire film on the roster, which by accident or design happened to be Cushing-less.

A British man and wife, Gerald and Marianne, venture into Bavaria for their honeymoon, and almost immediately receive a cordial invitation to dine with a local luminary named Doctor Ravna. The good doctor inhabits his own mansion and has both servants and three grown children, though no wife, and though he doesn't seem to be any sort of aristocrat, the locals in the Bavarian village defer to him as if he were some feudal lord. During dinner, it becomes evident that Ravna has taken a shine to Marianne, though Gerald doesn't see it coming until it's too late. Ravna is a vampire who uses his powers to steal Marianne away, and Gerald can find no one to help him, except an eccentric professor named Zimmer.

Since Hinds wrote both BRIDES and KISS under the psuedonym John Elder, it's tempting to believe that he produced the later movie simply to take advantage of what he deemed a killer ending-- and one even more in line with Hammer's anti-aristocracy attitude than BRIDES. Professor Zimmer has come to Ravna's territory because the vampire-lord seduced Zimmer's daughter not with fangs but with the lure of decadent pleasures, thus forcing Zimmer to destroy his own offspring. When Gerald invades the mansion to bring out Marianne, he gets a good look at the bacchanale Ravna has going with his children and various other vampire hangers-on-- though, to be sure, the audience doesn't actually see all that much, even with the restoration of brief scenes of bloody violence that were clipped from the U.S. TV version of KISS. Gerald manages to rescue Marianne and Zimmer unleashes the killer bats. The end.

KISS is a decent enough vampire film, but none of the characters have much presence. Gerald probably comes off best for his type of character; while his wife is antsy about the way the doctor looked at her, Gerald is seen blithely doing morning calisthenics, the very picture of the positive-minded type. Considering that the climax hinges on the opposition of Ravna and Zimmer, neither is more than a cipher, and so the killer ending doesn't have the kick it might have.
Posted by Gene Phillips at 3:41 PM
Email ThisBlogThis!Share to TwitterShare to FacebookShare to Pinterest
Labels: combative dramas, the marvelous