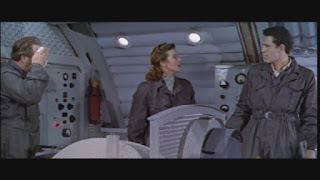 
Together with the Ian Fleming novel MOONRAKER, SATELLITE IN THE SKY makes the case that some Brits in the 1950s really, really wished that Great Britain could've had a space program.

Aside from that bit of sociological history, though, SATELLITE doesn't offer audiences very much. Taking into account the period's limitations of knowledge about space travel, the film offers a sober enough account of the technical exigencies of launching Britain's first orbiting spacecraft, the Stardust. Commander Haydon (Kieron Moore) is the stalwart fellow in charge of the orbital expedition, but he gets some verbal opposition from a local reporter, Kim (Lois Maxwell), who doesn't like her country wasting resources on spaceflight.  Romantic tension underlies their respective political stances, of course.

Unbeknowst to either of them, one of the men slated to go on the expedition brings with him a nuclear bomb, which he plans to detonate in space for an anti-nuclear demonstration. To complicate things even more, reporter Kim sneaks along on the flight. One would've thought that her extra weight, as well as that of the bomb, would have thrown the Stardust off its course, but that possible problem is addressed only fleetingly. The big problem is that when the bomb is released, it becomes attached to the ship's hull. Thus the Stardust can't descend back to Earth without endangering the populace with the bomb, and if the ship remains in orbit, eventually the ship and its crew will all be destroyed.

The characters are simply stereotypes, though at least they have some modest variety, in contrast to this film from the same year.  Kim gets the most background-- both her father and brother lost their lives to the space effort, conveniently explaining her animus to the Stardust. Still, she's essentially there to be converted to the rightness of this noble undertaking, as well as being the soul source of romantic involvement. The execution of both characters and plot is never better than average, so SATELLITE is most interesting as a cultural time-capsule. 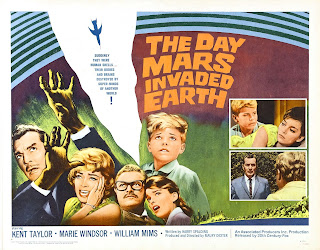 THE DAY MARS INVADED EARTH is a low-budget independent with nearly no budget for FX, and its only "name" actors were leads Kent Taylor and Marie Windsor, as the heads of a family beleaguered by an atypical "Martian invasion." And yet, even though Doctor Fielding (Taylor) and his family are fairly stereotypical, I liked the film better than many similar low-budget efforts.

Dr. Fielding, a scientist involved in the U.S.'s project to land on a robotic probe on Mars, experiences a strange disorientation when the probe makes landfall, only to be destroyed by forces unknown. Fielding takes a vacation and journeys to California to join his family-- wife, teen daughter and middle-school son-- who inhabit a huge mansion surrounded on all sides by towering trees and cultivated English gardens. He and other family-members start seeing duplicates of themselves wandering the estate. Only near the conclusion does Fielding understand that Martians, whose bodies are made of pure energy, have come to Earth to forestall any further attempts of the third planet to investigate the fourth.  To this end they duplicate the bodies of important personages, like Fielding-- so the originals can no longer be kept around.

The stolid, no-frills approach of the film has its strengths, and though the concept of the "passionless duplicates" is probably borrowed from INVASION OF THE BODY SNATCHERS, the Martians seem credible in that they don't care about imitating human culture, merely putting an end to an annoyance. But the setting is MARS's strongest element. Even though the majority of the scenes take place in daytime, the mansion-grounds are so large than the few inhabitants seem to get lost in them, and the trees and encircling fence encourage a sense of entrapment-- a particular standout being the fate of the boyfriend of Fielding's daughter, who dies in a simple car crash on the estate as a result of alien contrivance. Thus, like 1945's LEAVE HER TO HEAVEN, one sees that even open, clearly-lit settings can, under the right circumstances, trigger in audiences a sense of oppressive doom.