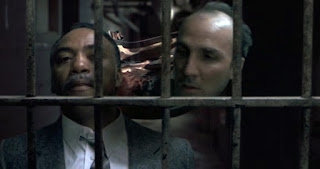 If there's one thing one can uniformly praise about the last three HELLRAISER films to feature Doug Bradley's Pinhead, it's that they all abandoned a particular bankrupt idea introduced in the third film and carried into the fourth; the idea that Pinhead and his fellow demons had to be prevented from busting out of Hell and invading the modern world. IMO Barker's Hell functions best not as a clear and present danger to temporal reality, as seen in 1999's clunky END OF DAYS, but as a domain of transgressive temptation. In most films it's asserted that Pinhead can't menace those who are innocent of summoning him for evil reasons, though HELL ON EARTH bends that rule to the point of near-breaking. So the later films' shift to using Pinhead as a source of sado-Satanic temptation was certainly an improvement on the idea of hell not just being raised, but breaking loose.

The fifth HELLRAISER film initiated this shift, and in my previous review I praised HELLRAISER: INFERNO for plunging its possibly-sinful protagonist into a noir-like world of sex, sin and corruption. HELLRAISER: HELLSEEKER unfortunately reprises almost the same basic idea, but telegraphs the plot-twist without a trace of the subtlety employed by the creators of INFERNO. Director Rick Bota, who would also helm the next two franchise-entries back-to-back during the same year, shows a total lack of the visual style that's so important to the franchise, while leading man Dean Winters turns in a workmanlike performance as Trevor, a man accused of murdering his wife. The twist, despite being telegraphed, is muddled and confusing, and the only reason the film stands out is that it marks the return of Kirsty Cotton, again played by Ashley Laurence and last seen stuck in an asylum as a side-point within HELL ON EARTH.

Unfortunately, though I admire Laurence's acting and I'm sure she was glad to get the work, the role itself is crap. The few lines that recapitulate the relationship between Kirsty and Pinhead, the demon she managed to escape, are poorly written and capture none of the tension present in the first two films. Kirsty might as well have been "Generic Lifetime Movie Wife," for all the difference her character makes. This is without question the worst entry in the series. 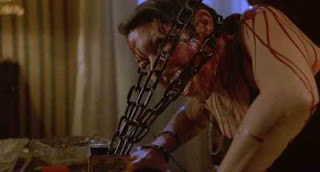 HELLRAISER: DEADER isn't much better, though the audience gets a protagonist who's somewhat sympathetic. It's another lady reporter this time, Amy Klein (Kari Wuhrer), out to investigate a European cult, "the Deaders," rumored to kill their members and then resurrect them. If I had not read online that both this film and the subsequent HELLWORLD came from re-purposed scripts that originally had nothing to do with the franchise, I would assume that the scripters were deriving this idea from HELL ON EARTH's use of the zombie-raising trope. (I must admit that there is a prevalent association between hell and the illegitimate raising of the dead-- the trope shows up in one of the surviving stories of Sumerian Ishtar-- but "dead people walking" just doesn't fit the sadomasochistic mythos of HELLRAISER.) The writers at least do as much as possible to make this look like a Hellraiser entry: the head of the Deader cult is a descendant of the man who created the Lament Configuration, and, as shown in the still above, the box even serves to unleash those nasty infernal chains on Amy, though this deviation from canon is proved to be a short-lived nightmare. But though Wuhrer is good, she can't do much with the incoherent script. At the eleventh hour it's suggested that Amy has some molestation issues with her dead father, apparently for no reason but to ratchet up the heroine's agonies. 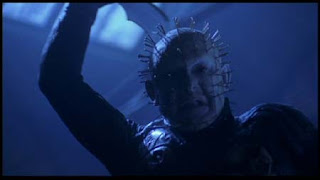 Next to HELLSEEKER and DEADER, HELLWORLD is at least modesty entertaining, partly because it suckers the mythos-devotee into thinking that it's gone totally off the rails, showing the urbane Pinhead in scenes like the one above: chopping someone's head off with a mundane axe. However, fans of the franchise may be pleased that the canon is in the end preserved, and in a much more involved manner than a simple bad dream.

I suspect that HELLWORLD's original script was patterned upon 1980s slasher-flicks like BLOODY NEW YEAR and KILLER PARTY, in that the Bota flick deals with a quintet of American teens being systematically knocked off during a lavish party. The party celebrates the success of the online game "Hellworld," which, by some murky plot-contrivance, has channeled the real names and associations of Pinhead into aspects of the game. The five youngsters are all devotees of the game, as was their former sixth member Adam, who committed suicide two years previous.  The host of the party is billed only as "the Host," and played by Lance Henriksen, who was reputedly offered the role of Pinhead for the first film. Pinhead and some of his fellow demons show up during the festivities, using tried-and-true slasher-methods to murder the friends of the late Adam. But are the Cenobites the real source of the evil, or is it-- someone or something else?

The five protagonists are as flat and uninvolving as are most slasher-victims, but that's almost become a standard in the genre. The resolution regarding Pinhead's uncharacteristic actions isn't any masterpiece of puzzle-solving, but at least it isn't telegraphed as in HELLSEEKER. The production values are better than the previous Bota pictures, which isn't saying a lot. Doug Bradley gets more stuff to do on-camera rather than just standing around, though his dialogue is dull in the extreme. If this is, as I expect, his last perfomance as Pinhead, he could have found worse final outings.
Posted by Gene Phillips at 1:39 PM
Email ThisBlogThis!Share to TwitterShare to FacebookShare to Pinterest
Labels: the marvelous