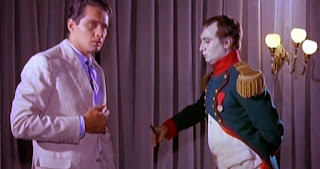 
SPY IN YOUR EYE was the American title for an Italian Eurospy movie, directed by Vittorio Sala. The "eye" of the title refers to the glass eye of Colonel Lancaster (Dana Andrews), who sends the hero Brett Morris on his missions. Unfortunately for the good guys, evil Russian agents have put a miniature camera inside the colonel's false eye, which allows them to see things he sees.

This aspect of the film wasn't highlighted in the original film, and it has very little impact on the main plot. Morris must seek to protect Paula, a dead scientist's daughter, because bad spies suspect that she may have notes on her father's invention, a hand-held death-ray. Paula claims not to know anything, but no one believes her. In fact, as I remember some Chinese agents do get hold of a finished death-ray gun at one point, and use it to shoot down a bird in flight. That's all we ever see of the death-ray, but unlike some of these "Bond on the cheap" flicks, at least you get to see the marvelous doohickey everyone's running around after. Some may remember that in THE SECOND BEST SECRET AGENT, the rumored weapon never becomes more than a scientific theory.

Sala directs this spy-flick in a oddly restrained manner for the first half, as if it were a realistic espionage flick. Then in the fllm's latter half, Morris starts encountering some oddball threats. One, shown above, is a wax dummy of Napoleon that can stab people who get too close. And at the ending, Morris infiltrates a laboratory-- Russian, I think-- in which the whole room is set on a revolving plate, in order to conceal it behind a wall. When a fight breaks out between Morris and the bad spies, this makes for an odd climax, as sections of the room start shifting around. In fact, in a scene reminiscent of AUSTIN POWERS, a henchwoman gets crunched by a moving desk, when she could have simply jumped on top of it to avoid injury. Despite the star power of Dana Andrews, and the nascent talent of Pier Angeli in the role of Paula, it's a fairly dull outing, partly because it lacks a noteworthy villain. 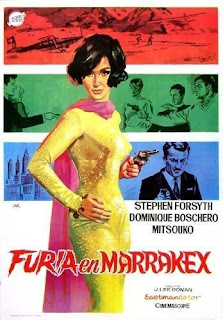 FURY IN MARRAKECH, though also an Italian production, fares much better in its Bondian efforts. In the print I saw the agent is called "Bob Dixon," though the original idea was apparently to make FURY one of the "Bob Fleming" series, the last in the series before this being KILLERS ARE CHALLENGED. But this film has a sprightlier feel to it, and it doesn't mind undercutting some of the spy-genre's serious tropes.

This time there's a plot to flood the European market with counterfeit money, and there's a big bad guy, Karl Kuntz, behind it all, who has a SPECTRE-style conference with other big-time crooks in order to coordinate their efforts. However, there's a fly in the ointment: a female thief infiltrated Kuntz's organization and stole some of the fake money. Kuntz wants to recover the money and kill the thief, but Dixon's organization has already found out about the operation. So Dixon wants to find the girl and use her to find Kuntz, and the printing-plates used to make the fake dough.

That plot set-up out of the way, FURY is then free to send its hero traipsing through the Caribbean, the Swiss Alps, and, of course, Marrakech, During his travels he fights with the henchmen of Kuntz, which includes a tough blonde girl who not only uses a little karate but is also seen beating up a bound victim with her fists-- rather an unusual sight in the 1960s. The film's clever about its spy-gadgets-- a pocket flamethrower, a pen that shoots around corners-- but sadly, Dixon can't use the souped-up car devised by the Q-like technician, because-- he has to travel by plane!

There's a lively chase-scene in the snow-covered Alps, capped off by a bizarre bit of humor, when one of Dixon's female assistants reveals, for no reason save a concluding gag, that "she" is really a "he" (even though it's still a "she" playing the role).

Posted by Gene Phillips at 3:49 PM
Email ThisBlogThis!Share to TwitterShare to FacebookShare to Pinterest
Labels: combative adventures, diabolical devices (u), the marvelous, the uncanny