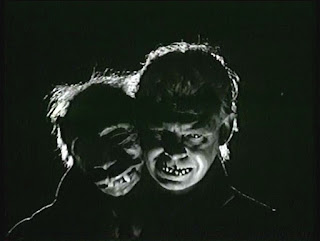 
The  title almost begged for latter-day comedians to view the whole film as cheesy, particularly when one could excerpt a few key scenes (like the one where the protagonist finds an extra eye growing in his shoulder) to make the whole endeavor sound ludicrous. But THE MANSTER-- the only horror film of journeyman director George P. Breakstone (who also provided the original   story)-- is actually a decent take on the venerable Jekyll-and-Hyde theme, with the added touch of placing all the action in a country foreign to "Jekyll."

The Robert Louis Stevenson protagonist experiments on himself, but Larry Stanford is the victim of a mad doctor's obsession with bringing about spontaneous mutations. Rather surprisingly, though Doctor Suzuki is aware that radiation is more likely to cause mutation than chemicals, he chooses to use the same method as the much earlier Stevenson story. Maybe, as a postwar Japanese man, using radiation would have been a sensitive subject?

Before Larry, an American war correspondent, shows up Suzuki's doorstep looking for an interview with the eminent scientist, Suzuki has already experimented on his wife and his brother, both of whom have become ugly mutations, though not taking the "Mister Hyde" pathway that Larry will be forced upon. Suzuki doesn't emphasize any particular reason for wanting to explore this particular avenue of research, but he's smart enough to know that, once he's surreptitiously drugged Larry, the mad doc has to have some way to keep tabs on him. Thus Suzuki not only entices the rather bland American with temptations of exotic Japanese pleasures, the scientist also obliges his mistress Tara-- who knows all about the forbidden experiments-- to play up to the journalist. It's hardly a controlled experiment, though, for soon Larry starts experiencing murderous urges. In true werewolf style he transforms into a hairy killer, slaughters innocents, and then transforms back to his original form. Soon the mutation becomes so aggravated that the "monster side" of Larry begins to assume its own separate existence-- first as an eye in the shoulder, and then as a second bestial head. Finally, to Larry's good fortune at the climax, the Manster completely splits off from Larry, which allows the creature to be killed while Larry is spared the vengeance of the law-- but not before the deaths of both Suzuki and Tara.

I haven't mentioned the fact that Larry, unlike his prototype Doctor Jekyll, is a married man. It's made clear early on that he left his wife Linda behind in the U.S. so that he could pursue his career without hindrance. In fact, when he first visits Suzuki, he's intending to return to Linda, but Suzuki gives him a chance to taste forbidden fruit in an alien culture. Indeed, although Larry's apparently been a "good boy" while jaunting around different countries, his rather erotic experiences may be analogous to those of American soldiers stationed in Japan after the War, looking to collect the Spoils of War. Larry's failure to return forces Linda to journey to Japan, where she locks horns with Tara over her husband's soul. To the script's credit, Tara is not as unfeeling as Suzuki about Larry's fate, and it's clear from a later conversation that she became Suzuki's "kept woman" after being forced into a life of prostitution. Suzuki blandly dismisses Tara's misgivings, and offers to marry her to keep her quiet (having already slain his mutated wife). Both Tara's sympathies and Suzuki's imperial indifference to lesser emotions are well-performed by the respective actors. The other actors are not nearly as compelling, but all of them are serviceable in this well-paced story of a nice-guy American having his dark side unleashed in the shadow of Hiroshima.