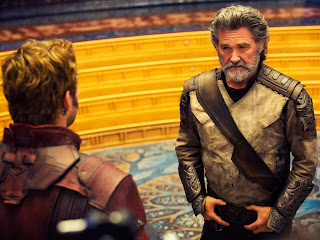 I tried to avoid reading other reviews of this film before writing mine, but by chance I read a fragment where some critic lambasted the film for being too much of a repeat of the first film, leading me to assume that this critic wrote his review on mental autopilot.

Yes, given that the series features an ensemble of generally quarrelsome characters, there are plot-threads carried over from the first film, which might give some viewers the impression of repetition. But compared to some of the ham-handed handling of soap-opera plotting in some Marvel films-- particularly CAPTAIN AMERICA CIVIL WAR-- VOL. 2, both written and directed by James Gunn, represents a quantum leap. Indeed, a lot of the set-up situations in the 2014 film were more than a little forced, given that the ensemble characters were thrown together in "Dirty Dozen" fashion. This time, since the Guardians have now been in one another's company for some time--they're first seen undertaking a mercenary operation for a planetary culture in their sprawling galactic empire-- one can take their bond for granted in VOL.2.

The weakest of the "carried-over" threads-- Rocket the Non-Raccoon's inability to work and play well with others--  is still relatively consistent, as well as efficient in the role it plays in the overall story. Two Gamora plotlines, respectively regarding her sister and her love-interest Peter "Star-Lord" Quill-- are handled nicely, even if neither reveals any hidden twists. The plug-ugly Drax doesn't precisely get a new plot-thread of his own, but his dominant trait-- that of saying whatever comes to his mind, no matter how stupid-- is counterpointed by a new character, Mantis, who is largely an innocent and thus unable to suss out Drax's bullshit. Thus, though Mantis may not be intended to be a series regular, her chemistry with Drax is a highlight of the film's comic dimension. Drax (Dave Bautista) arguably gets the most juicy lines in the film.

However, the central plot is that of Earthman Peter Quill. The first film established the basics of the conundrum: following the death of his mother-- who maintained that Quill's absent father was an alien-- Quill was abducted from Earth by an alien. This was not Quill's daddy, but a buccaneer named Yondu, and for reasons unknown he chose to raise Quill as one of his band of space-pirates. This forced association assured that even though Yondu functioned as a surrogate father to Quill, the hero rebelled against Yondu's authority and escaped his control. Large parts of the first film are devoted to delineating the love-hate relationship between Qiull and Yondu.

Then, fortuitously enough, Ego, an alien purporting to be Quill's real dad shows up and invites the Guardians to his own planet, occupied only by him and his servant Mantis. Two Guardians, Rocket and Groot, stay behind to get involved in Yondu's continued pursuit of Quill, while Quill. Gamora and Drax journey to Ego's world. Ego reveals that he is a godlike being called a "Celestial," one who evolved from a primary mental entity. He says that he mated with Quill's mother but had to leave in order to replenish his energies on his self-created planet, and his story is partly affirmed by the fact that Quill discovers his heritage of Celestial powers (which explains one of the apparent plot-flaws of the first film). However, there would be no real conflict if Ego didn't have some secrets to be revealed, and sure enough, Real Daddy is even more heinous than Substitute Daddy. Gunn charts the relationship of Ego and his former henchman Yondu credibly, so that Quill finds out some hidden facts about his indebtedness to his surrogate father. I won't detail Ego's master plan here. Suffice to say, though, that it starts out looking like a sci-fi version of the Christian Father-God taking his Son, into his bosom, and then ends up as a nasty parody of that trope, slightly cross-bred with the history of Greek Zeus and his multiple spawnings.

I didn't research the persons responsible for VOL. 2's visual design, but the imagery here far excels that of the first film, to say nothing of most other Marvel films (particularly the visually stunted THOR films). A lot of critics have complained about the supposed sameness of the Marvel films, but I don't imagine any of them will celebrate things like the rich, Hindu-istic look of Ego's planet (complete with lots of mandala-circles) or the Luc Besson-like design of the Sovereign people's "virtual bicycles." Here, too, Gunn sets a new level of craft for others to imitate-- though they probably will not.

A lagniappe for hardcore Marvel-fans is to be had in drawing comparisons between the film's characters and the original versions of figures like Ego and Mantis-- not to mention one whose name is dropped in the end-teaser.
ADDENDUM 8-31-2021: After a second viewing of the film, I downgraded its mythicity to "fair," as I don't think Gunn does all that much with the "son of God" symbolism.
Posted by Gene Phillips at 2:19 PM
Email ThisBlogThis!Share to TwitterShare to FacebookShare to Pinterest
Labels: combative adventures, the marvelous