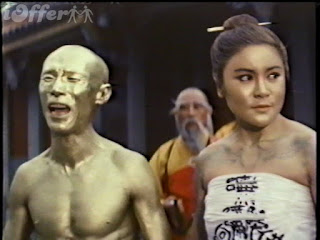 Though I've not liked the works of kung fu diva Polly Shang Kwan as much as those of competitors like Chia Ling and Angela Mao, she's certainly a solid enough talent. That said, this cheap Taiwanese production is not the best intro to Polly's kickass-ery.

Polly plays Shih Pu Chuan, a girl with an unexplained passion for mastering Shaolin kung fu. However, the Shaolin temple doesn't allow women. Eventually, after some forgettable comic bits, Shih receives succor from a crazy old hermit monk, Chin Li, who has no problems with female students. At the same time, the temple has suffered a recent embarrassment. Thieves masquerading as monks infiltrated the temple and stole a series of books known as the "Ta Mo Classics," which confer great powers on the practitioners. Shih's mentor is versed in these techniques and teaches them to Shih so that she can retrieve the books from the thieves.

The weird abilities here are not borderline-real, like those I discussed in my review of THE FIVE DEADLY VENOMS.  In the film's most memorable scene, Shih faces off against a couple of kung-fu thieves who have used occult knowledge to stretch their limbs a la Plastic Man. Shih matches them in this respect-- although naturally the effects depicted are very dodgy-- and in another scene displays the ability to paralyze people with a touch. However, the side effect of all this martial training is that Shih starts turning into a man. At times she even grows a mustache, though most of the time the film's content to show her dressing in man's clothes.

Naturally, Shih wants to reverse this situation. However, her dippy master can't remember the "Negative Kung Fu" procedure necessary, so-- he escapes her questioning by faking his own death and having his corpse painted gold to serve as a temple-statue. During Shih's quest she finds her own solution by beating all the thieves and learning their secrets-- though some of the secrets seem rather non-occult, like a guy who seems to be invisible at first but is just using black clothes and makeup to blend in with darkness. In the end Shih, once more female, finds out that Chin Li is still alive, but he redeems himself by beating off a new threat and dying for real-- which is supposed to give the whole megilla a tragic ending, despite all the weird comic stuff that has preceded it. It's because of this conclusion that I can't quite deem FIGHT a total comedy, even though some moments, like a transformed man-turned-woman falling for Shih were certainly meant to be amusing.

Posted by Gene Phillips at 1:27 PM
Email ThisBlogThis!Share to TwitterShare to FacebookShare to Pinterest
Labels: combative adventures, the marvelous