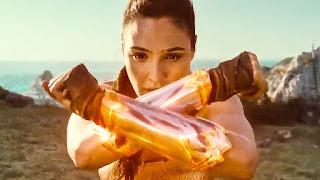 It's been two weeks since the American debut of WONDER WOMAN, another linchpin in the "DC Movie Universe," directed by Patty Jenkins and scripted by Zach Snyder, Allan Heinberg and Jason Fuchs. The film has not only reaped substantial box office revenue-- reportedly the highest ever for a film centered on a female comic book character-- but also considerable critical praise. I agree with some of the praise, where it touches lead actress Gal Gadot, whose nuanced performance far exceeds her merely adequate walk-on as the Amazon Princess in BATMAN VS. SUPERMAN: DAWN OF JUSTICE. Yet, where some reviews have championed WONDER WOMAN as an anodyne to earlier DC films, particular those of Snyder and Christopher Nolan, I find that Jenkins' film has almost as many plot-holes as those of her predecessors-- though the holes are definitely covered up better.

Of the many sins that can be lain at the door of Snyder's DAWN OF JUSTICE, the greatest is that of overweening ambition. The director, or someone involved with the project, picked up a schtick from 1990s DC Comics, which posited that Batman and Superman were not best buddies, as they'd been seen from the 1940s on, but two fractious crime-fighters who could just barely tolerate one another. Snyder took this idea and blew it up to Wagnerian proportions, implicitly as part of a game-plan for the eventual formation of the Justice League out of the chaos of the Batman-Superman conflict. Although other DC heroes are referenced in the course of this story, only Wonder Woman-- though she's never called that in DAWN or in her own film-- takes a direct role in sorting out the differences between DC's Big Two. Moreover, the frame-story of WONDER WOMAN takes place some time after DAWN OF JUSTICE, as Princess Diana records the story of her origin-- that is, the main body of the film-- for the benefit of Bruce Wayne.

I have no shortage of praise for the scripters' conceit of placing Princess Diana's origin within the last days of World War One. As most comics-mavens know, the character's creator, psychologist William Moulton Marston, conceived that Wonder Woman came into being when the Amazons of Paradise Island became aware of the chaos of World War Two. Knowing that this havoc was the creation of the war-god Mars (later given his Greek name "Ares" in subsequent versions), they sent their finest warrior, Princess Diana, into "man's world" to stem the tide of fascism while simultaneously fighting for the rights of womanhood against the misogyny in patriarchal cultures. Marston's origin was entirely appropriate for a superheroine conceived in 1941, when America itself was on the cusp of entering the worldwide conflict, but many encounters since then between Wonder Woman and various "cartoony Nazis" has somewhat vitiated the appeal of Axis villains. Placing the character in World War One still allows Diana to be opposed to German military aggression, but the fact that the Germans answer to the Kaiser rather than the Fuhrer makes the scenario seem fresher.

Once the film gets beyond the early scenes on Paradise Island-- the most problematic in terms of consistency-- the script gets superb mileage out of the Marstonesque spectacle of seeing Diana portrayed as a forthright, independent woman playing "fish out of water" in a patriarchal culture. As in Marston's origin, American pilot Steve Trevor (Chris Pine) serves as the motivating force behind Diana's decision to leave her home Themiscyra. Perhaps predictably, the film places more emphasis on the mission to stop Ares-- whom Diana believes to be somehow responsible for the worldwide conflict-- than on her romantic infatuation with the first man she's ever seen. Throughout the film Trevor's character-- never much more than a "male Lois Lane" even in the best WONDER WOMAN comics-- takes on nearly as much dimension as Diana himself. He alternates between devotion to his duty-- that of delivering secret documents to the English high command-- and his utter fascination with a woman who is literally a creature born of fantasy. When the high command won't act on the information that might lead them to wipe out the villainous Doctor Poison-- an updating of the first costumed villain whom the comic-book heroine battled-- Trevor assembled a team of raffish mercenaries to help him, as well as Diana, penetrate the horrors of the trenches of "No Man's Land." Trevor also supplies the excuse for the script to work in a new version of Marston's comedy-relief character "Etta Candy" (Lucy Davis), who does supply some laughs but is more significant for making mention of women's inability to vote during the World War One years. Finally, he's also the voice of doubt in Diana's ears as she maintains that the Greek god of war is responsible for the war. She turns out to be right in the essentials but wrong in some particulars, and so like her comic-book predecessor she concludes the film with a knock-down drag-out battle against the embodiment of human aggression (visually modeled on the 1990s version of Ares as conceived by artist George Perez). 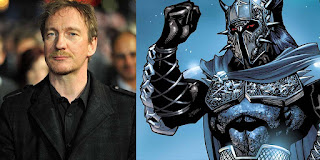 Okay, having sketched the events of the last two-thirds of the film-- which is all that most people will remember about it anyway-- now I have to address all the problems in the first third, which virtually scream out "we don't care if this makes any sense or not."

I had no expectations that WONDER WOMAN would be a faithful reproduction of Marston's Paradise Island; I merely hoped that the film's conception of it would be internally consistent  Indeed, I'm just as glad that Jenkins et al didn't try to give us an island where Amazons rode giant kangaroos and piloted invisible jets. But whatever juvenile gimmicks appeared in the original comic book, Marston's conception of the island's backstory possessed an elegant logic. In short, Athena created the Amazons to serve as a bulwark against male aggression in the ancient world, and Jenkins et al do get that much right. But Jenkins hurries past one of Marston's best motifs-- the idea that the Amazon queen Hippolyta ruined it all when she succumbed to a man's blandishments. Instead, the script merely claims that somehow the Amazons were conquered and enslaved, after which Athena liberated them and allowed them to build their isolated colony on Themiscyra. I'll admit that Jenkins and Co. couldn't have made any references to "magic girdles" without getting laughs from their audience. But Jenkins' total erasure of Hippolyta's sexual conquest also screws up the story-logic by which the Amazons then remove themselves from mankind into a literal hortus conclusus, a world without men. The only thing Jenkins is left with is that the Amazons are given their hidden isle so that far in the future they will be able to conquer the menace of Ares-- though none of the scenes on Themiscyra give any indication as to how the Amazons are supposed to figure out when Ares is going to show his face in the mortal world.

Then there's the matter of how the Amazons have hidden from mankind for so long. In some of the comics, the Amazons have mastered an advanced technology, so that they're diverting the attention of man's world though super-science. Yet in the movie, the only "protection" the non-technological Amazons have is a sort of invisibility screen, apparently left in place all these centuries by the gods of Greece-- although the screen does nothing to actually keep out either the plane of Steve Trevor or a ship full of pursuing Germans. How is such a meager defense supposed to have kept away sailing-ships over the eons? Or should one simply suppose that in the past the Amazons simply slaughtered all unwanted visitors, as they destroy the entire German contingent (admittedly in self-defense).

And then there's the question of why the screen should work at all, since all but one of the gods is dead. It seems that in the distant past, the God of War turned into the God of "Get These Kids Off My Lawn," for instead of taking pleasure in manipulating mortals into warfare, he simply wants all of mankind eradicated. When the other gods don't go along with this, Ares somehow kills all of them except Zeus, though the King of the Gods receives a mortal wound in the struggle. Ares is wounded too, which is perhaps why he doesn't seem to doing much of anything until the 20th century. The timeline is very hard to follow, but it sounds like Zeus must have hung on for quite a while, until one day Queen Hippolyte wanted to experience having a child without the direct contribution from a man. Zeus, however, does contribute to the equation, bringing the clay statue of Diana to life (which the film does not show), but also investing Diana with his power before he Zeus dies. As in the Marston origin Diana, the only child to actually grow to maturity on the isle of these immortal women, achieves a sort of "the last is the first" distinction. Still, there doesn't seem to much point to this "slash and burn" assault on Mount Olympus. I get that a movie-franchise doesn't have a bunch of deities hanging around-- the 1975 teleseries elided the gods for the same reason. But I think there might have been a better way to neutralize the Olympians than mass slaughter.

Adding to the confusion is that the Amazons-- even though they have no way of knowing when Ares will come back-- maintain a shrine containing a magical sword which is said to be the only way to slay the war-god. Or maybe it's not, because everything that the Amazons say about the sword is a little cryptic. But when it's revealed in the eleventh hour that the sword won't kill Ares, and that Diana has to find another way, it makes one wonder why that damn sanctuary was built at all.

I could go on about other acts of conspicuous carelessness, like the fact that the Amazons are fully conversant in dozens of modern languages yet have no idea that there's a world war going on. Yet I'll wrap up by saying that if Jenkins and Co. succeeded at anything, it's in the characterization of Princess Diana. All too often post-Marston versions of Wonder Woman have been over-invested in Wonder Woman's anti-aggression rhetoric-- far more than Marston himself, since he makes clear that his Diana is something of a "female jock." Thus, in later versions Wonder Woman often came off as something of a "plaster saint," rather than a fallible human being. The WONDER WOMAN script makes one misstep, when Diana's aunt Antiope criticizes the young heroine for being riddled with doubts. Perhaps this was an idea that was discarded early on, for throughout the film proper Diana is if anything a creature of unrelenting passions. I found this a refreshing take on the character. When she wants to protect a struggling Belgian village, she's passionate about that, and when she wants to kill the being she holds responsible, she's no less passionate about that. At the very least this ensures that there's no major disconnect between a woman who battles the agents of war by beating up people. And because both Jenkins' direction and the script give Gadot ample opportunity to show different states of emotion, Diana becomes, despite all other script-flaws, the embodiment of what Marston wanted: "a powerful being of light and happiness" amid a world torn by "hatreds, war, and destruction."

Posted by Gene Phillips at 2:39 PM
Email ThisBlogThis!Share to TwitterShare to FacebookShare to Pinterest
Labels: combative adventures, the marvelous