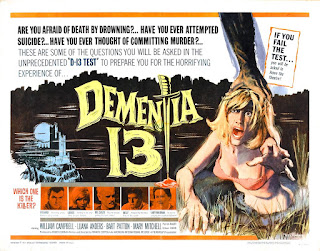 
DEMENTIA 13 was the first mainstream directorial efforts by Francis Ford Coppola, but if one didn't know of his later fame, the film-- whose script Coppola also wrote-- would not signal any special promise.

To be sure, DEMENTIA began as producer Roger Corman seeking to tailgate on the success of Hitchcock's PSYCHO, and in following this dictum, Coppola was just delivering what the producer wanted. But even imitative directors have been known to produce worthy work, and DEMENTIA, despite some fine visuals, suffers from a weak script that doesn't even do that good a job of imitating its source.

Yes, just as PSYCHO starts out with a female POV character who dies early in the film,so does DEMENTIA. In terms of character Louise (Luana Anders) resembles Marion less than the many golddiggers (of both sexes) from the Hitchcock anthology series. She's married her husband John because she knows he has wealthy relatives in Ireland, and quarrels with him when she learns that his mother's will is set to devote all of the family wealth to charity, in the name of her deceased daughter Kathleen. John has a heart attack during the quarrel and Louise conceals his dead body, the better to travel to Ireland and try to get the will changed to Louise's benefit. How she thinks this will work without a living husband is anyone's guess.

Louise ingratiates herself into the castle of Lady Haloran and her two grown sons, all of whom participate in odd rituals devoted to the late Kathleen. Louise gets the idea of running a scam on the bereaved old woman, but while she's in the midst of laying her plans, an axe-wielding psycho kills Louise and conceals her body. The POV then largely shifts to the local doctor, an intense fellow named Caleb, who decides to solve the mystery of the missing daughter-in-law.

Because all of the characters are so thin, DEMENTIA fails to generate much suspense about who done it, and Corman even injected a little more killing when Coppola failed to provide it. It's interesting that Coppola's storytelling barely resembles the brisk efficiency of Hitchcock. If anything, his slow, meditative style bears more resemblance to DIABOLIQUE, the evocative 1955 that helped interest Hitchcock in attempting a horror film. However, early Coppola not only isn't even close to Hitchcock, he isn't even fit to polish the boots of Henri-George Clouzot.
Posted by Gene Phillips at 4:39 PM
Email ThisBlogThis!Share to TwitterShare to FacebookShare to Pinterest
Labels: perilous psychos (u), the uncanny, weird families and societies (u)