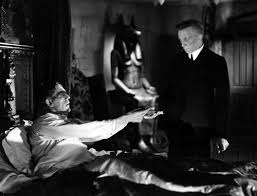 I wanted to give THE GHOUL a higher mythicity-rating than "poor." In the 1930s Great Britain didn't produce much of lasting interest within the horror-genre, as witness the same-year mystery-horror flick THE SHADOW. Director T. Hayes Hunter, an American transplanted to England, does a good job of giving THE GHOUL the murky, German-Expressionist look of early Universal horror films. and there's a clear attempt to duplicate the success of Universal's THE MUMMY by featuring Boris Karloff in another story with Egyptian elements. From what I can make out, the screenplay used only minimal elements from a now forgotten book-and-play by one Frank King, and what emerges is more like a crossbreeding of Wilkie Collins' THE MOONSTONE (sinister people looking for a fabulous gem) and Edgar Allan Poe (seemingly dead man comes back to life due to catalepsy). These jumbled elements don't necessarily take away from the story's potential for symbolic discourse, but when all's said and done, THE GHOUL just leaves a "good-looking corpse." with no real life in it.

A quick sequence establishes that a sinister Arab, Aga Ben Dragore, is in England looking for a valuable gem, the Eternal Light. (In contrast to Collins' novel, the implication is not that Dragore boasts any authentic ownership of the bauble: he's just an adventurer looking for the main chance.) An informant tells Dragore that the gem is currently owned by eccentric Egyptologist Henry Morlant. Morlant himself is dying, but he's become so invested in Egyptian ritual that he has a statue to Anubis in his bedroom, and he plans a ritual to the god when he dies-- one that involves making sure that he can present the Eternal Light to the god when he Morlant is buried with the gem.

The film then shows Morlant on his death-bed, making his final arrangements with his apparently faithful bulter Laing (Ernest Thesiger doing a rather thick Scottish accent). Morlant swears to come back from the grave after he perishes, and to that end, he even instructs Laing to leave a key on the inside of Morlant's crypt, so that Morlant can get out easily when Anubis gives him "eternal life" for the successful completion of the ritual.

The announcement of Morlant's death initiates the apportioning of his holdings to his heirs, by the family lawyer, Broughton. In many "old dark house" films, this would be an excuse to bring in a small army of relatives, the better for some of them to be killed off during the story, but given that this is "the Moonstone" rather than "Ten Little Indians," we only get two cousins, Ralph and Betty, and Betty's comedy-relief friend Kaney. Despite the fact that Ralph and Betty snipe at each other for most of the film, they're clearly the romantic leads, which happens to cohere somewhat with a major plot-line of Collins' MOONSTONE, also a story involving about cousin-cousin romance. They know nothing about Morlant's weird habits of worship or the fabulous gem, but other people certainly do-- such as Dragore, posing as a scholar-colleague to Morlant in order to snoop around for the gem. On top of that, the audience knows that Laing stole the gem from the crypt before sealing up Morlant's body. Then, as if verifying the truth of the Egyptian magic, a haggard-looking Morlant staggers out of the crypt, looking for the missing jewel.

The film's most powerful scenes are naturally those of Karloff stalking around Frankenstein-style. Because he moves so slowly, he only manages to kill one victim, the butler Laing. Still, Morlant is still a source of horror to those who behold what seems to be a walking dead man. Meanwhile, the hunt for the gem by greedy self-seekers-- Dragore, possibly Broughton, and a thief in priest's clothing. Admittedly, a lot of their actions don't scan too well on close analysis, but they do keep things moving until the climax. Morlant gets back to the tomb, tries to perform his ritual before the statue of Anubis, and dies. One of the thieves traps Ralph in the tomb and only a blazing fire sets him free. It's then quickly revealed that Morlant suffered from catalepsy, and that all of his actions-- including bending metal bars-- are supposedly the actions of a living man.

It's a pretty weak explanation, but since the film has steered clear of the bonafide occultism of THE MUMMY, it seems to be the only one available, and thus the film falls into the trope-category of "freakish flesh," both for Morlant's catalepsy and his demonstration of uncanny strength. Since the film merely uses Egyptian religion as a plot-device and has no interest in its metaphysical ramifications, THE GHOUL's main function would seem to be sociological: not only in terms of describing the way certain Englishmen become fascinated with exotic cultures, but also with regard to the subject of cultural consanguinity.


Posted by Gene Phillips at 2:58 PM
Email ThisBlogThis!Share to TwitterShare to FacebookShare to Pinterest
Labels: freakish flesh (u), the uncanny