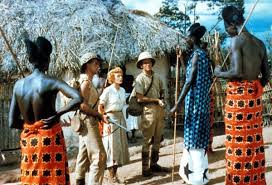 
The 1937 adaptation of Rider Haggard's classic novel KING SOLOMON'S MINES was remarkably faithful to the source, even allowing for the fact that the film includes a gratuitous female character to provide the movie with a feminine lead. However, the plot was substantially the same, as were all the elements that gave it an uncanny phenomenality-- the exotic feel of the African terrain where Allan Quatermain ventures with his European expedition, and the weird customs of the people they encounter: the Kikuanas, a tribe so isolated that its people have never seen white people despite Europe's considerable incursions into the "Dark Continent."

However, both the script and direction of the 1950 film take pains to avoid any of the book's uncanny content. In this essay from my literary blog I mentioned how the novel invoked the exotic sense of a pair of mountains known as "Sheba's Breasts:" However, in the 1950 film the mountains are seen from a very great distance, even though they're still used as a functional marker for the expedition's entry in Kikuanaland. The mountains in the novel are also a prefiguration of Quatermain's encounter with a "terrible female," the gnarled old witch-finder Gagool, also the main villain of the story. This versions of MINES not only de-emphasizes the tribe's superstitions about witches, Gagool only appears as a male adviser to the film's main villain, evil chieftain Twala, Even Kikuanaland's mystique as the purported land of Solomon's mines is played down.

The main concern of MINES is a jungle-trek romance, in which married woman Elizabeth Curtis (Deborah Kerr) hires Allan Quatermain (Stewart Granger) to find her lost treasure-seeking husband. During the trek the two romantic leads both bicker and fall in love, even before Elizabeth knows that her husband's dead. The film's only concern is this sort of banal "will-they-won't-they," with barely any attention to Elizabeth's moral struggle as a result of falling out of love with her lost husband. I mentioned in my review of the 1937 film that its version of Quatermain was true to the book, having him played as a fifty-something man, but the 1950 film goes with a young he-man image for this version of the Great White Hunter.

Because of the concluding combat between Twala and his goodguy nemesis Umbopa-- whose role is also diminished-- this is a combative adventure, but only in the naturalistic mode, in contrast to both the 1937 version and the goofy one from 1985.