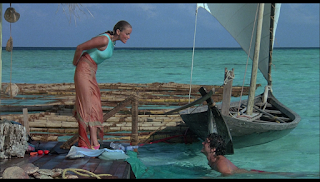 In my review of THOSE DEAR DEPARTED I mentioned that the film had probably semi-swiped the title of this Bo Derek film. This was sort of like stealing pennies from a blind man. for John Derek's last film with his then-wife Bo, who continued with his surname after Derek's death in 1998, was ineluctably his worst, and possibly among the worst films of all time.

The film introduced the viewer to the May-December couple of Kate (Bo) and Scott (Anthony Quinn). Scott fears an imminent death by heart attack, and so decides to take his own life because he can no longer make love to his beauteous, younger-by-forty-years wife. To his surprise, after having put his widow through all of this heartache, he learns that he can manifest as a ghost and that only Kate can see him. After a little dialogue with a quirky angel (Julie Newmar), Scott gets the idea that he might still enjoy connubial bliss with Kate. All Scott and Kate need to do-- since Scott can't affect anything in the real world-- is to have Kate kill some young stud, so that Scott's spirit can enter his dead body.

Usually, when professional filmmakers start out with an obnoxious premise, such as the main characters committing murder for their own benefit, the comedy proceeds out of having everything go wrong for the characters. Not in GHOSTS CAN'T DO IT, though. Even though Scott is usually presented as an arrogant, rather sexist SOB, Kate is tempted to do his bidding and kill some young dude so that she can be reunited with her beloved. Her temptation increases when she meets a twenty-something guy who relentlessly pursues her. His name is Fausto, and in most productions, I'd assume that the scripter (Derek again) was referencing the idea of a "Faustian bargain." But I doubt that's the case with GHOSTS, because the whole idea of such a bargain is that-- once again-- it has to go wrong somehow. And Derek, for whatever reason, doesn't want more than extremely minor impediments to Scott's reincarnation.

Derek's sole purpose seems to be just to find borderline sleazy ways to put Bo on display, usually with no more sense of tension than one would get from a video-montage. Even when Kate is threatened by a gunman while she's swimming naked in a pool, there's no sense that this might impede Kate's plans. She dithers a little about the morality of killing a man, and she gets a little absolution from the script in that when Fausto's life is placed in peril, she makes a belated attempt to save him. I've more or less given away the film's conclusion, but I can't really picture anyone caring.

The nicest thing I can say about the film is that Bo tries to put a lot of passion into her stupid dialogue, which is more than one gets from Anthony Quinn or from the cameo of our current President. She does get naked a little, but anyone who tries to watch for those scenes is likely to sleep through them.

Posted by Gene Phillips at 3:42 PM
Email ThisBlogThis!Share to TwitterShare to FacebookShare to Pinterest
Labels: the marvelous