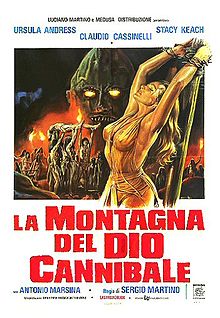 
Though I appreciate a number of ultraviolent movies, I've never had a warm spot in my heart-- or should that be stomach?-- for the "cannibal film." Still, like any other genre, it's theoretically possible for some of them to be exemplary for their kind. MOUNTAIN isn't such an exemplary work. It was directed by Sergio Martino, who had directed westerns and SF-adventures, but seemed to excel with giallo horror-mysteries.

The narrative for MOUNTAIN seems strongly indebted to assorted jungle-adventure films-- not least 1950's KING SOLOMON'S MINES-- in that it deals with a jungle-guide being hired by a woman to find her lost husband in some wilderness far from civilization. Here the woman is Susan, played by Ursula Andress, and her statuesque, blonde appearance may be just as responsible for the film's financial success as its ultraviolence. Certainly the majority of film-posters linger upon the sight of a bound Andress, being subjected to terrible torments by the titular cannibals.

Susan's looking for her anthropologist-husband, lost during an earlier expedition into the wilds of New Guinea. Susan's accompanied by her obnoxious brother, some bearers, and a mysterious man, Foster, who turns out to have some past history with the cannibals. Foster's origins are about the only thing that keeps the trek from devolving into complete tedium, as the less-than-great white hunters keep stumbling over various jungle perils-- though none of the animals, however menacing, are anything more than naturalistic types.

The cannibals, though, are very much a people whose exoticism verges on the demonic. They are a dwindling race, though it's not clear if they've almost been wiped out by white colonials or by rival tribes. Foster reveals that when he was taken prisoner by them, he was spared because he cared for the chief's son. However, for reasons unexplained, Foster has made it his personal crusade to stamp out the tribe if he can. Does he want to finish what other whites have started? There's no clue, for MOUNTAIN is not internally consistent enough to display strong sociological content.

Most of the film's gross-out moments occur when the travelers have fallen into the cannibals' hands, and one torment, in which Susan is painted with some gooey substance (honey?). was recycled in a later jungle-film, John Derek's 1981 TARZAN THE APE MAN, where Bo Derek gets the sloppy torture. By this point there's no evidence that the cannibals are in any way capable of sentiments like gratitude: they are entirely demonic creatures, represented by a nasty dwarf who torments one of Susan's allies.

Frankly, the most entertainment I got from this film was from an extra included on Blue Underground's DVD edition. Martino gives a standard interview about the filming of MOUNTAIN, except for one moment, in which he claims that he didn't put much sexual material in the film-- at which point the director of the featurette cuts to a half-dozen scenes showing men screwing animals and the like.

Posted by Gene Phillips at 1:55 PM
Email ThisBlogThis!Share to TwitterShare to FacebookShare to Pinterest
Labels: astounding animals (n), exotic lands and customs (u), freakish flesh (u), the uncanny