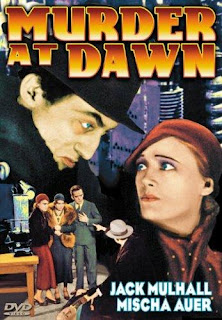 
This is an "old dark house" film that offers none of the expected tropes. There's a dark house, to which a young couple and their friends show up, but nobody's trying to scare them with ghostly phenomena, nor are there any masked masterminds hanging about.

The owner of the house is Professor Farrington, and his daughter Doris wants her father's blessing on her coming nuptials. However, Farrington has just finished a new invention, a device that accumulates energy from the sun, with which he hopes to liberate a world of "wage slaves" by giving the world infinite power. However, one of the servants (Mischa Auer) wants to get the plans to the invention in order to sell the accumulator as a death-ray. To this end, he not only murders one of Farrington's other guests, he ties the scientist to a chair and threatens to let him be incinerated by his own invention, when it gathers up the energy of the dawning sun and discharges it right at him.

MURDER is limply directed by Richard Thorpe, a journeyman who would later become known for various musicals of the Classic Hollywood years, as well as four Tarzan films, starting with TARZAN ESCAPES. The feature itself has nothing much to recommend it, except for the rare sight of comic player Auer playing a nasty villain and the appearance of Kenneth Strickfadden's wild electrical FX, making their second appearance after 1931's FRANKENSTEIN.

Posted by Gene Phillips at 1:34 PM
Email ThisBlogThis!Share to TwitterShare to FacebookShare to Pinterest
Labels: the marvelous