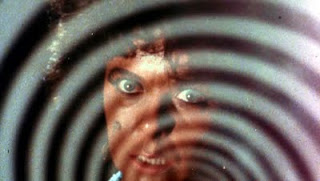 I've often had the experience of re-viewing some film I hated in youth and finding in it some motif that I found interesting, even my general sense of the movie's merit was no greater. However, when I was young I despised Ray Dennis Steckler's INCREDIBLY LONG TITLE THAT I'M NOT GOING TO TYPE, and a recent re-viewing did nothing to change that opinion.

I tend to sympathize with the efforts of low-budget filmmakers, who don't have the luxury of expensive sets and must often resort to shooting "on location" in situations that aren't very enviable. But I think I could forgive Steckler's charmless scenes of carnival rides or vaulting buildings-- lots of tedious zoom shots by cinematographer Joseph Mascelli--  if Steckler had possessed any semblance of a story to tell. But INCREDIBLY doesn't even have the virtue of being good low-budget sleaze, like Michael Findlay's FLESH trilogy.

In essence, Steckler's story is a lot like Universal's 1943 MAD GHOUL, in which a mad scientist takes control of an innocent pawn and sends him out to commit assorted murders. Here the pawn is a young wastrel, Jerry (played by Steckler under the pseudonym "Cash Flagg") and his manipulator is Estrella, a carnival fortune teller who apparently took lessons in being a poverty-row plotter. Though Estrella seems to living a fairly marginal existence, in that she has to fleece rubes for a living while employed at a local carnival, she happens to be a master hypnotist. She takes offense when Jerry pursues her sister Carmelita, and the two sisters, for no particular reason, subject Jerry to hypnotic treatment. He becomes a psycho-killer who kills a couple of women but doesn't remember doing it until the climax of the film, when he returns to the carnival to confront his tormentors.

I might even buy Estrella as a bargain-basement Svengali, except that in her carnival domicile she somehow keeps a dungeon full of earlier victims, whom she and her hunchbacked assistant have mutilated with acid, and who have apparently all devolved into madmen, perhaps due to more hypnotic manipulation. I found myself wondering how many fortunes she had to read to feed all those deformed freaks, whom she didn't apparently keep around for any purpose. Of course the only real function of these "strange creatures" is to go berserk at the film's conclusion, incidentally interrupting one of the film's mediocre musical numbers. (INCREDIBLY was billed as the "first monster-movie musical.")

There are various other support-characters, all of whom exist just to eat up running-time, and none of whom are any more interesting than Jerry and Estrella. That no one can act worth a damn should go without saying.

I haven't seen most of Steckler's later work, but will note that his 1970 SINTHIA THE DEVIL'S DOLL was at least better than this work. INCREDIBLY will probably always be his signature work, though. if only because it was "clean" enough to be shown on mainstream television.

Posted by Gene Phillips at 3:42 PM
Email ThisBlogThis!Share to TwitterShare to FacebookShare to Pinterest
Labels: enthralling hypnotism and illusionism (u), freakish flesh (u), perilous psychos (u), the uncanny