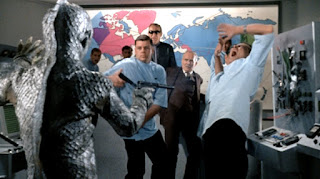 
There's not much of a symbolic discourse in TERROR BENEATH THE SEA, so I have to rate the film's mythicity as "poor." Yet it almost seems a shame to do so, since the flick was meant to be nothing more than a quickie SF-thriller aimed at young adolescents. I never saw TERROR in my youth, but its wild pulpy situations and use of vivid primary colors reminds me of a kidhood-favorite, 1969's LATITUDE ZERO, which also combined American and Japanese actors.

ZERO, however, included a couple of former A-listers, while all of the Americans in TERROR were amateurs moonlighting from their day-jobs for this production. Given that the director was Japanese, and that the only billed Japanese actor was Sonny ("not yet STREET FIGHTER") Chiba, it's amazing that the amateurs come off as well as they do here. Still, the director and scriptwriter-- adapting a Japanese original novel-- must have known that the key to selling the film was action, action, action-- and thus there's almost no time devoted to any character not in the midst of some crucial situation.

Chiba and American Peggy Neal play Ken and Jenny, two ace reporters invited to observe underwater tests of submarine technology. When the test goes awry, Ken glimpses, via underwater camera, a strange humanoid form under the depths, but no one credits him. However, Jenny accompanies Ken in a scuba-expedition in order to nose around for news.

As so often happens in juvenile fiction, protagonists with no special training immediately stumble across a major secret-- in this case, an underwater base, run by a mad genius, Doctor Moore. Moore is a genius who has brought a coterie of great scientists to his retreat for one purpose: to engineer a race of 'water cyborgs." These cyborgs, produced largely by introducing cybernetics into a human being. Ken and Jenny, whom Moore recognizes upon meeting them, are to be inducted into the ranks of the aquatic automatons. The navy commences looking for the missing reporters, leading to a major conflict between Moore's city and U.S. submarines-- though naturally, the actions of the two brave reporters make a big difference in thwarting Moore's evil plans.

TERROR was apparently the conception of American producers even though it was made by Toei Studios in Japan, using the aforementioned amateur Caucasians to counterfeit the appearance of an American B-movie. Many such co-productions are filled with odd, risible lines of dialogue, but TERROR is pretty straight-faced and straightforward: the only line that struck me a little odd was Moore's announcement, "What you see here now is a water cyborg."

One other interesting detail is that while Japanese studios of the time made a great number of fantasy-films focused on heroes or monsters, TERROR is one of the few 1960s live-action films that focuses largely on the villain.

Posted by Gene Phillips at 10:00 AM
Email ThisBlogThis!Share to TwitterShare to FacebookShare to Pinterest
Labels: combative adventures, the marvelous