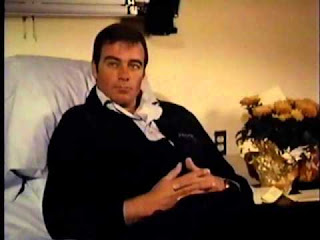 If MST2K hadn't picked up this flop pilot and given it their spoof-treatment under the title STRANDED IN SPACE, I don't know if even diehard SF-nerds like myself would remember it.
In essence, it looks as if the credited writer-- one Gerald Sanford-- simply watched the 1969 film JOURNEY TO THE FAR SIDE OF THE SUN and recycled it into a potential series-concept. American astronaut Neil Stryker, along with two other companions, goes into orbit, but somehow he and his friends end up on "Terra," a near-duplicate of the planet Earth, but existing on the opposite side of the sun, where astronomers can't see it-- and also, supposedly never notice its effects on the solar system's integrity.

Stryker-- listlessly played by familiar TV-face Glenn Corbett-- soon tips to the fact that even though Terra looks almost exactly like Southern California, there are subtle differences, like the fact that most people are left-handed rather than right-handed. More tellingly for the potential of future plotlines, all of Terra-- or maybe just North America-- is controlled by an Orwellian government, "The Perfect Order," which somehow took over the world thirty-five years ago and brainwashed most of the populace into believing the Order to being beneficent. Stryker doesn't want a revolution, he just wants to go back to his world, but he has to dodge the Order's murderous agents, led by a taciturn Cameron Mitchell. Had some executive been foolish enough to greenlight this for a series, presumably most episodes would have dealt with the astronaut alternately fighting the Order and trying to find some way to the right Earth.

Since the script gives the actors only minimal emotions to express, it's not surprising that none of them do more than "phone it in." Director Lee Katzin, like scripter Sanford, spent almost his whole career in TV, though he did helm one Robert Aldrich production, the mediocre WHAT EVER HAPPENED TO AUNT ALICE?