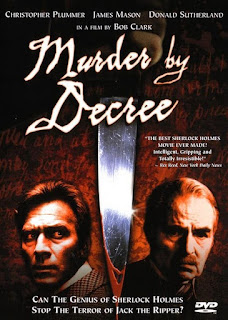 Just to get my phenomenological concerns out of the way, MURDER BY DECREE is predominantly a film of the uncanny. As I've done with a very few other entries here, I've denoted what I've elsewhere called the "centric phenomenality" first, while adding that there is an "eccentric phenomenality" that barely impacts on the narrative. In this film, the one element of marvelous phenomenality is that of a psychic who gives the hero some clues regarding the identity of Jack the Ripper. The psychic's abilities are presented as irrefutable, so they don't fit the model of the "ambivalent powers" that I've discussed in such films as 2004's RENEGADE. Yet the story certainly isn't primarily about this particular marvel, so that I judge that the element is eccentric in nature.

Another set of comparisons, perhaps more germane to detective-film fans, is that MURDER BY DECREE is the second major film to pit Sherlock Holmes against the Ripper, following in the footsteps of 1965's A STUDY IN TERROR. DECREE shares some of STUDY's concerns, which I summarized thusly:

Hill’s film uses the menace of the Ripper murders for the purpose of societal critique.  Throughout STUDY the fate of the prostitutes menaced by  “Saucy Jack” indicts the callousness of British society, an indictment with which the conservative Doyle might not have agreed.  Holmes is placed in the position of striving to both save the marginalized poor and to keep the government, whatever its faults, from falling into chaos.


It's certainly possible that someone involved with the later film, directed by Bob Clark not long after his seminal slasher-film BLACK CHRISTMAS, saw STUDY and decided to attempt the same theme with a bigger budget. (DECREE's budget was $5 million, while STUDY's was more like $200,000. At the same time, the official source for DECREE is a Holmes-less nonfiction book, THE RIPPER FILE, so a lot of the similarities may be attributed to popular speculations about the identity of "Saucy Jack." Still, it's interesting that actors Anthony Quayle and Frank Finlay appear in both movies, with Finlay even portraying Inspector Lestrade in both.

The greatest difference between the two films is that whereas STUDY's Jack is a genuine "perilous psycho" whose psychotic activities are covered up by representatives of the British government. In DECREE, there really is no "Mad Jack," but rather two relatively sane murderers killing English prostitutes in apparently ritualistic patterns. All of their efforts are devoted to throwing off suspicion about their real purpose: to conceal the past indiscretions of a real-life aristocrat. (False names are used for the conspirators, though originally they too were based on actual personages.)

Though director Clark had been associated only with low-budget films, the production has an "A-list" look all the way, particularly in its casting of Holmes and Watson with top-decker actors Christopher Plummer and James Mason. Their chemistry provides the film's best moments, particularly in little moments, like Holmes' impatience with seeing Watson try to pick a single pea off his food-plate without squashing it. However, for a Ripper film there are relatively few "spooky" moments, and gore is more implied than seen. Clark shows a few scenes in which the Ripper commits murders without showing his face, so that he seems in line with the killers of both giallo flicks and slashers. However, when Clark does let his "fake Ripper" be seen, the actor doesn't inspire fear or even convey the sense of being a tough customer. He and Holmes have a running battle near the conclusion of the film, but it's nowhere near as spirited a fight as the one in STUDY IN TERROR. On top of that, the fight is concluded when the fake Ripper gets caught in a fishing-net and somehow gets strangled in its coils.

Clearly director and writer chose to avoid the "thriller" aspect of STUDY IN TERROR, placing more emphasis upon the drama of Holmes' conflict as he learns that many of his country's high officials are implicated in the sordid case. Since even the presence of the fictional Holmes couldn't be allowed to contradict the established history of the Ripper, in which the killer is never publicly identitifed, Holmes is obliged to keep the solution of the mystery secret. John Hopkins' script demonstrates an admirable acquaintance with the political concerns of the time-- 1887's "Bloody Sunday" is referenced-- and the degradation of the English prostitutes is conveyed no less ably than in the 1965 film. Indeed, the dominant myth of DECREE, as with STUDY, is that of women's misuse by the male-centered culture-- though I tend to think the women in STUDY are given a bit more fleshing-out.

The Ripper murders are of course "bizarre crimes," and though there's no real psycho here, there are killers posing as a madman, which means that the film uses a "phantasmal figuration" trope not unlike that of THE CAT AND THE CANARY.

Posted by Gene Phillips at 2:44 PM
Email ThisBlogThis!Share to TwitterShare to FacebookShare to Pinterest
Labels: bizarre crimes (u), combative dramas, phantasmal figurations (u), the marvelous, the uncanny