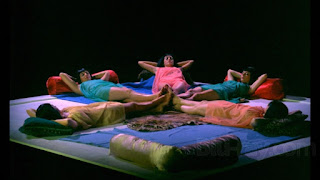 
I suppose it might seem anile to speak of a dopey sexploitation film like ZETA ONE-- also known under such names as ALIEN WOMEN and THE LOVE FACTOR-- in terms of any sociological ramifications. And in truth, ZETA doesn't have any of the oddball charms I found in, say, a similar breast-obsessed flick like INVASION OF THE STAR CREATURES. ZETA's main sources of interest are twofold: (1) it represents a specific type of sexploitation typical of Great Britain in the "swinging sixties," and (2) it's a rare example of a sex-comedy where the women are at once empowered and disempowered.

It's hard to tell if ZETA expresses any personal fetishes on the part of its one-shot director-- who reportedly gave Tigon Studios an incomprehensible potpourri of footage-- or the unbilled raconteurs who stepped in to film additional scenes that made the flick slightly more coherent. The inspiration for the film stemmed from a British sex-picture magazine in which models posed naked or semi-naked in sci-fi outfits. The magazine may have been a response to the influence of the Barbarella comic book, but it's awfully hard to picture writer-director Michael Cort having opened any kind of a book.

Though there are some piddling references to the James Bond spy-craze-- mostly in a frame-sequence involving an agent named "James Word" (Robin Hawdon) -- the film's strongest trope is that of "aliens abduct humans for sexual purposes," seen in British movies as far back as 1954's DEVIL GIRL FROM MARS. Usually, the aliens are deficient in one gender and are making up the deficit with Earthpeople of said gender. Here, the alien "Angvians" (a jumble for "vaginas") are,  for reasons not well explained. abducting Earth-women to take back to a planet full of other women. Earth-agencies seem only dimly aware of this incursion, and play no role in contending with the "alien women." Instead, the extraterrestrial enchantresses get opposition from an evil group of Earthmen, led by a mastermind named Bourdon (James Robertson Justice). Bourdon, having somehow learned of the Angvians' existence, wants to reverse the abduction-project and start capturing alien girls for exploitation on Earth.

Predictably, the movie has no intent to do anything with this "battle of the sexes" except to put a lot of semi-nude women on display, and if ZETA does nothing else, it does assemble an admirable list of British starlets, including Yutte Stensgaard, Anna Gael, Brigitte Skay, and Valerie Leon-- three of whom, for no appreciable reason, sport the names of the Greek Moirae: Clotho, Lachesis, and Atropos. Equally nonsensical is the name of the Angvians' leader, Zeta, played by a covered-up Dawn Addams, who easily turns in the most mechanical performance. Addams doesn't have many scenes, but she plays them all the same, with a forced cheery air that probably reflected her relief at not having to parade around half-naked like the younger actresses.

The plot is merely a farrago of scenes in which the agent of one side gets captured by the other side, interspersed with dull explanatory scenes-- one of which even makes a game of strip-poker tedious. The film's only memorable sequence transpires at the conclusion. Bourdon, having captured one of the Angvians, assembles his men to hunt her like an animal in the forest. A troop of warrior-women, all in pasties and bikini-bottoms, descends to fight Bourdon's men (the villain himself inexplicably disappears from the story, probably due to actor Justice walking off the set). Though the Angvians have been seen performing some very mediocre martial arts back on their own world, the warrior-women defeat the evil exploiters of womankind by pointing their fingers and zapping them into unconsciousness with invisible beams.  Then, with the villains defeated, the Angvians belatedly decide that it might be nice to have a stud around the house, so they invite James Word to join them on Angvia for endless hetero romps. This, far more than showing the hot actresses semi-nude, is a more disempowering message. At least when agents like Derek Flint and Matt Helm end their adventures getting oodles of quim, it's because they-- unlike the worthless Word-- have actually DONE something to merit the hero's reward.

Posted by Gene Phillips at 12:42 PM
Email ThisBlogThis!Share to TwitterShare to FacebookShare to Pinterest
Labels: combative comedies, the marvelous