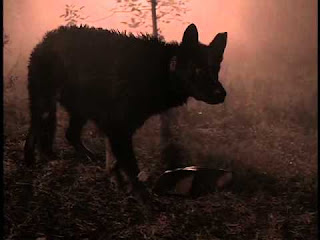 This particular HOUND was the first of four Canadian TV-productions which starred Matt Frewer in the role of Sherlock Holmes. I find Frewer's reading of Holmes to be one of the worst ever, in that he plays Holmes as a mere smarty-pants fop. However, I chose to rate this TV-movie's mythicity as "fair" simply because in every other way it's a serviceable, if unexceptional, version of the classic Doyle novel. It's such a strong story that even though this TV-movie is obliged to strip the story down to its bare essentials, it does succeed in touching on all of the major mythologems of the narrative. That's more than one can say of what may well be the poorest adaptation ever, the blatantly unfaithful-- and uninsightful-- comedy version from 1978.

Frewer aside, all of the actors comport themselves well enough, from Kenneth Welsh's Doctor Watson to Jason London, whose Sir Henry Baskerville comes off as a likable character, rather than the more typical cipher. Rodney Gibbons, who directed the other three films in the series, allows for some nice location shots, though the production's too cheap to spring for fog-machines. And the filmmakers did exert themselves to get a pretty impressive "hound," one big enough to be credibly mistaken for a wolf-- which is something one doesn't even see in some of the classier flicks.

Posted by Gene Phillips at 3:17 PM
Email ThisBlogThis!Share to TwitterShare to FacebookShare to Pinterest
Labels: phantasmal figurations (u), the uncanny