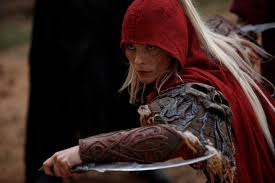 
Though SYFY's notorious giant-beast films have almost always been a waste of time, on occasion some of their low-budget fantasy-adventures have their moments.

WITCHVILLE is for the most part an adequate time-killer. In a vague medieval world, Malachi. the only son of the realm's king, is called back to assume the crown when his father passes. No sooner does he return than he's informed that the realm's crops have been devastated by an evil witch, the Red Queen, and her skull-masked soldiers. Strangely, neither Malachi nor his soldiers seem to believe that real witches even exist, but a local witch-hunter, Heinrich, proves that even an innocent-looking grandmother happens to be a pawn of the Queen.

Despite the fact that Malachi and his people know where the Queen's village is, he doesn't take the realm's army to wipe the place off the map, but naturally decides to attack her with a small handful of men and the magic-making witch-hunter. They pick up a few extra hands on the way when Malachi enlists to his quest some thieves who try to rob the expedition. On their way they're repeatedly attacked by the Queen's magic-wielding soldiers, led by her red-cowled daughter Josefa. Frankly, the design of Josefa's costume and the performance of actress Myanna Buring in the role is WITCHVILLE'S only real asset.

Malachi is a thoroughly bland character, and so, even though there's a big dramatic revelation as to his family history it has little impact. The action-scenes are adequate but unexceptional. 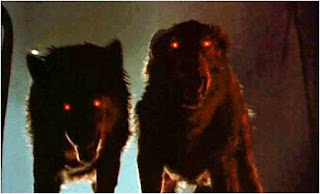 HELLHOUNDS also shows its paltry budget, but the direction-- by former kid actor Rick Shroder-- is considerably better, and the script shows some awareness of the archaic culture-- that of pagan Greece-- where the action takes place.

Greek warrior Kleitos is scheduled to marry his betrothed, Demetria. However, some unknown killer steals Demetria's soul and sends it down into Hades, the Greek afterlife. Kleitos and a small group of his fellow warriors actually brave Hades with the goal of reuniting Demetria's soul with her comatose body.

In many respects, HELLHOUNDS and WITCHVILLE follow the same basic template. However, one saving grace of HELLHOUNDS' script is that, although the warriors initially have no weapons capable of harming the denizens of Hades, they figure out that, since everything in the afterlife is created by the death-god, poison taken from one of Hades' monsters can be used against other guardians, like the titular Hounds of Hell.

Though a Canadian production, HELLHOUNDS was filmed in Romania, which may have helped it acquire a little more of an "old world" look.
Posted by Gene Phillips at 3:23 PM
Email ThisBlogThis!Share to TwitterShare to FacebookShare to Pinterest
Labels: combative adventures, the marvelous