THE SCORPION KING 3: BATTLE FOR REDEMPTION; PEGASUS VS, CHIMERA (both 2012) 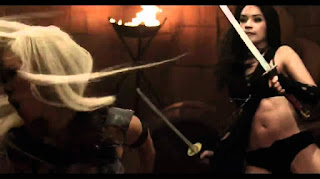 
At the end of the first SCORPION KING, barbarian assassin Mathayus overcomes an evil general and inherits his empire, as well as a comely prophetess. I’ve seen, but entirely forgotten, the events of SCORPION KING 2, but Number Three handily dispenses with any references thereto. REDEMPTION starts Mathayus off from square one: his wedded wife is dead and his empire is lost. But it’s cost him of the rollicking good cheer the hero displayed in the first opus.
Since Mathayus couldn’t be “relatable” unless he were deeply affected by his wife’s passing, he becomes a figure of utter seriousness throughout REDEMPTION. However, on the chance that any persons renting this DTV item wanted to see something of the old Mathayus, said customers get their wishes fulfilled. Once agsin, Mathauyus is set on the path of heroism by a patron, who wants to prevent an evil sorcerer (Billy Zane) from conquering the world. However, this time the patron insists that the former Scorpion King take along a partner: a bulky Northern boor named Olaf, who, for the remainder of the film, supplies most of the film’s humorous moments. True, none of Olaf’s  dumb-stooge-humor is good, but I suppose he serves the purpose of keeping the protagonist’s dour attitude from sinking the film.

Though REDEMPTION clearly has a lower budget than the original flick, it’s still several grades better than the average SYFY-Channel sword-and-sludge. The actors are well costumed, the fights decently orchestrated, and there’s some OK location shots. Once again the hero starts out as a simple mercenary and is “redeemed” by his innate altruism. He ends up looking for a missing princess as well as for the sorcerer’s  magic book, and the princess turns out to be the secret head of a clan of might-as-well-be-ninjas, mostly female. Princess Silda (Krystal Vee) is comely and has a good scene doing a practice-fight with Mathayus and kicking his ass. She also has a one-on-one with a sword-fight with a female demon sent by the evil sorcerer. No wheels are invented here, but Billy Zane distinguishes himself with an enjoyable comic take on the usual cloddish dictator. 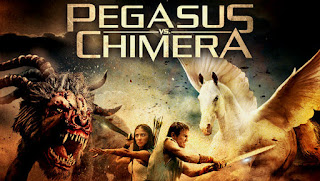 REDEMPTION looks really good next to PEGASUS  VS. CHIMERA, a truly bare-bones version of the Pegasus story. In the original Greek myth, the hero Bellerophon gains control of the winged horse Pegasus, and one of his deeds includes killing a destrucrtive beast, the Chimera.

This time around, a tyrant named Orthos kills the father of a young man, Belleros. The youth hides away long enough to put a few years on him. At this point he decides it’s finally the right time to go forth and avenge his father.

By this time, Orthos has gotten older, though he staves off the aging process with spells from his pet magician. However, Ortthos still has a lot of enemies, mostly the race of the defiant Tyrians, to which Belleros belongs.  The wizard encourages Orthus to overcome all opposition by summoning the Chiimera from the depths of Hades, and Orthos agrees.

Not long before summoning the Chimera, Orthos slays the Tyrian king, who happened to have a tough daughter, skilled in archery and swordplay. Daughter Philony stumbles across Belleros, and they make an alliance. They can’t do anything against the supernatural power of the Chimera, but a good seer helps them summon Pegasus from his constellation in the firmament. The sorceress also tells them if Pegasus doesn’t finish their task by a certain time, the whole universe will fall apart. (Wonder if Big Daddy Zeus knows about this?)

It’s a serviceable enough plot, but PEGASUS is hobbled by its budget. The CGI is so restricted that the winged horse and the reptilian monster can only gesture menacingly at one another whenever they fight. Even fight-scenes between actors are hampered by the director’s penchant for quick cuts possibly utilized to avoid the necessity for retakes. The actors try gamely to sustain the material, but none of them—not even Rae (“I used to be A-list”) Dawn Chong-- can make a silk purse of this horse’s ass.