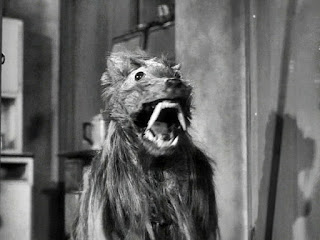 Watching THE KILLER SHREWS is a little like watching Sisyphus roll his boulder up to the top of the hill. You know that the boulder's going to fall down the other side as soon as it gets to the top, but you have a mild admiration of the condemned man's persistence.

SHREWS was the first film-credit for both director Ray Kellogg and writer Jay Simms. The same year, the two would collaborate on THE GIANT GILA MONSTER, which makes SHREWS's storyline look pretty good by comparison. While only the humans are in screen, SHREWS seems to be a fairly adequate thriller about the characters being besieged by murderous animals. When the "killer shrews" are on screen, however, no one above the age of five is likely to be able to take them seriously.

The hero of the film is sailboat captain Thorne Sherman (James Best). He and his pilot sail to a little-known island in order to deliver supplies. Sherman soon learns that two scientists, Doctors Baines and Craigis, have been experimenting on the tiny animals called shrews, in order to see if they can reduce their metabolism, for reasons that are never too clear. In addition to a servant and some livestock, the party also includes Craigis's daughter Ann (Ingrid Goude) and her former fiancee Jerry (Ken Curtis). It doesn't take long before Sherman realizes that there's trouble between the former lovers, and Ann begins showing Sherman favor-- chiefly because, when Ann was in danger earlier, Jerry preserved his own life rather than protecting her. It takes Sherman longer to find out the nature of the danger: tiny shrews that have been mutated to the size of wolves, so omnivorous that they'll almost totally devour their victims, even the bones.

The hubris implied by the careless scientific experiment takes second place to the duel of Sherman and Jerry for the fair Ann. Though both Best and Curtis became celebrated for later television roles, their performances are just fair, while that of Goude is dull. The best acting, oddly enough, is from Gordon McLendon as Doctor Baines, who's presented as the standard absent-minded scientist, and yet seems a little more convincing in his role (possibly because, despite the smallness of the role, he was also one of the producers).


Posted by Gene Phillips at 2:32 PM
Email ThisBlogThis!Share to TwitterShare to FacebookShare to Pinterest
Labels: the marvelous