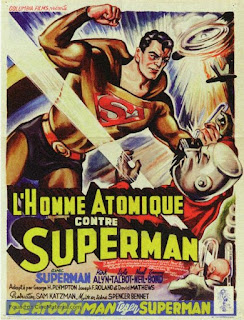 
Where cinematic sequels are concerned, viewers are generally lucky if the follow-up is even roughly as good as the originating work. Serials are no exception to this general rule, and thus it's extremely rare to see a sequel turn out better than the original.

The 1948 SUPERMAN, while successful with viewers, seems to be little more than a thinly plotted reprise of a story written for the Superman radio serial. ATOM MAN VS. SUPERMAN was also derived from a radio chapterplay, and was executed by three of the same creative personnel who worked on the 1948 film, but the difference between the two serials is as the proverbial light/day distinction. In addition, DC editor Whitney Ellsworth represented his company's interests during both serials. Yet because the first story makes precious few attempts to emulate the mood of the comics, I hypothesize that after the 1948 serial made respectable money, Ellsworth may have had a little more clout with the Hollywood crowd, resulting in a Superman serial closer to the source material.

To be sure, Kirk Alyn's one-note portrayal of Superman is pretty much the same. However, whereas SUPERMAN played things very down-to-earth, with the hero spending most of his time rescuing Jimmy Olsen and Lois Lane from the thugs of the Spider Lady, the sequel pits the Man of Steel against an "Atom Man," who wields a multitude of super-weapons fit to challenge a superhero. Further, though the Atom Man of the radio serial was not derived from the comics, in ATOM MAN the metal-masked super-villain is Superman's perpetual comic-book foe Luthor. In fact, the serial gets quite a bit of mileage from Luthor managing to convince much of the public-- though not the newspersons of the Daily Planet-- that he has reformed, and that he is actually being threatened by the New Villain on the Block. The idea of making Luthor the "secret identity" of a super-villain is one of the serial's many "shout-outs" to the primary Superman/Clark Kent mythology.

Further, this time the script goes out of its way to give Superman some larger-than-life stunts. Instead of just grabbing hoods and tossing them around, this time he rescues innocents from a burning ship, caps a blazing oil well, and gets exiled to "the empty doom" by Luthor's "space-transporter" device. In contrast to many serials, the script skillfully alternates between these spectacular feats and the more down-to-earth action (like saving Lois from falling out a window), so there's a greater sense of variety between the respective chapters. In the climactic sequence, Superman "bulldogs" Luthor's atomic rocket and sends it into the sea, and though the FX are inevitably simple, there's as much charm to this sequence as one sees in a similar climax in the 1978 SUPERMAN.

In the 1948 script, Lois Lane's primary function is to undermine Clark Kent, and her subordinate Jimmy Olsen simply goes along with whatever she tells him to do. This attitude is actually true to the first year of the SUPERMAN feature, wherein Lois felt that Clark's skill at reporting-- admittedly abetted by his super-powers-- overshadowed her own accomplishments, and she sometimes did undercut him when possible. However, Jerry Siegel didn't keep this trope running very long, at least in part because he wanted to promote a "will they-won't they" romantic feeling between Lois, Clark, and Clark's alter ego. The 1950 serial doesn't have any interest in selling romance, but ATOM MAN portrays Clark, Lois and Jimmy as colleagues who have known each other for some time. A number of small touches-- Lois celebrating her birthday at the Planet office, Jimmy asking Clark how to spell "anesthesia"-- makes the trio seem more rounded. Thus, when Superman does rescue Lois or Jimmy from peril, it no longer seems like a desperate attempt for the viewer's attention, as in the 1948 work. Further, the improved scripting gives actors Tommy Bond and Noel Neill the chance to make their characters more varied and vivacious.

In my review of the 1948 serial, I commented that its villain the Spider Lady lacked any of the charisma of the best serial villains, though actress Carol Forman had distinguished herself with a couple of much better "heavies." Lyle Talbot had played a number of heavies in his earlier films as well, but the script for ATOM MAN gives him a number of strong lines that establish his scientific wizardry and his overweening arrogance. In the last chapter, he abducts Lois and announces to her that he plans to destroy the Earth, remarking that she may soon be the last female member of the human species. Lois astutely mocks him, accusing him of wanting to create a "Noah's Ark," but Luthor calmly agrees with her assessment, showing off the spaceship on which he and his henchmen plan to escape the destruction. I suspect that this story-trope-- in which the villain more or less duplicates Superman's initiating situation of fleeing a collapsing planet-- was also original to the ATOM MAN screenplay, rather than stemming from the radio serial.

Lastly, though most serials progress erratically, leaping from one peril to another, ATOM MAN is relatively well-paced, and many if not all of the adventures proceed logically from their setups. (A particular favorite of mine is the sequence in which Lois pretends to ditch the Planet in order to work for Luthor and get the goods on him.) Even the moments that are a little on the loony side-- like Perry White insisting that Jimmy snap a picture of the oncoming atomic missile, moments before it's going to wipe out them and all of Metropolis-- seem to come about from a sense of fun, rather than poverty of imagination.

Posted by Gene Phillips at 2:35 PM
Email ThisBlogThis!Share to TwitterShare to FacebookShare to Pinterest
Labels: combative adventures, the marvelous