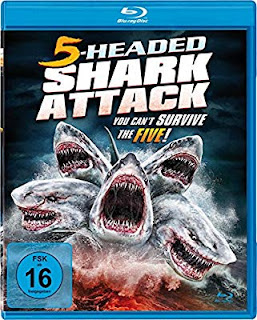 
Though I never expect much of Syfy's "giant critter" films, I've formed the habit of watching them just to gauge the gradations of badness.

These two sharkfests were preceded by both a "2-headed" and "3-headed," shark attack, after which I presume that some producer thought the number four was either unlucky or underwhelming, so he or she skipped ahead to "5" and then "6." All of the films were made by famed copycat studio The Asylum, and the first two in the series at least boasted some moderate-sized names in the acting department, such as Danny Trejo and Carmen Electra. However, I  recognized not a single name in the 2017 and 2018 entries in the series, which no doubt connotes the producers' deep and moving commitment to promoting young (and cheap) talent.

One might well expect that at this point in this "mockbuster" series, the creative personnel would be just going through the motions. Certainly "5-Headed" confirms this. Six credited writers and director Nico de Leon, who has no other credits except for being cinematographer on the same film, elected to churn out yet another take on JAWS. From what I can tell, the third film provides no more info than did the first two on how a multi-headed shark came into being, even though the protagonist is a lady marine biologist, Doctor Yost. She works for a marina in San Juan, and when Old Five-Heads shows up, her boss at the marina uses a combination of coercion and persuasion to get Yost and her gaggle of youthful college-interns to attempt to capture the beastie. Yost doesn't impress viewers with her smarts, given that even after she's lost one student to an unexpected attack, she again ventures out to catch the shark with an ordinary boat and more disposable students. After losing yet another youngster, she and her boss finally consult a not-too-grizzled shark-hunter, who's apparently the "Quint" of the story, as well as Yost's romantic interest. For good measure, there's also a "Mayor Vaughan" crammed into the story for no good reason, and his refusal to close the San Juan beach costs the usual hecatomb of lives.

The only half-decent scene in the film is the way in which the shark-hunter kills Five-Heads by impaling him with explosive charges, but this too seems extremely JAWS-derivative.

Strangely, though, someone at the Asylum must have decided to give the fourth film to a guy who at least had a little more experience making junky Syfy flicks, many of which are also bizarre shark-flicks. Thus one Mark Atkins chimes in as both director and co-writer (with just one other scribe),. and the result is-- well, still bad, but diverting in that the newest monster, Six-Heads I'll call him, gets to torment a bunch of dysfunctional married couples.

William (Brandon Auret), an old salt who apparently owns a little island somewhere, has chosen to monetize it by running what the script calls an "obstacle course marriage counseling service." In other words, about six couples with marital problems come to the island to use the setting for "trust-building" exercises. One immediate fly in the ointment, before Six-Heads even shows up, is that William himself has just lost his wife to another man. In fact, the ex-wife shows up with her lover in her own boat, asking William to sign the divorce papers. However, they don't get off scot free, for there's not only a six-headed shark in the offing, but also a storm that threatens to inundate the island, and thus deprive the embattled tourists of any high ground.

While the various characters aren't much better than stereotypes, at least they're lively stereotypes, particularly Mary (Thandi Sebe), a contract lawyer who keeps threatening to sue William for getting them into this mess. Neither the monster nor his numerous victim-munchings are any better or worse than dozens of other "bizarre shark" flicks. However, Atkins does provide an "origin" of sorts for the multi-headed critters, and there's a nice scene where William manages to chop off one of the monster's many heads and send it back to the drink to regenerate. I liked the performances of Auret and Sebe, which is the reason they're the only ones getting a mention.

Posted by Gene Phillips at 2:53 PM
Email ThisBlogThis!Share to TwitterShare to FacebookShare to Pinterest
Labels: the marvelous