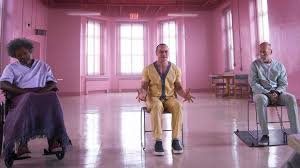 
Now that I've seen the culmination of M. Night Shyamalan's "ordinary superhero" trilogy-- the first two parts of which I reviewed here-- I tend to think of the whole in standard theatrical terms, with UNBREAKABLE as a fairly compelling first act, SPLIT as a weak second act, and GLASS as a strong third act.

As I stated in the earlier review, one of the more impressive things about Shyamalan's take on superheroes is that they don't really seem to escape quotidian existence. Even when a writer like Alan Moore tries to satirize the superhero idiom, he still has to reproduce many if not all of the most notorious superhero tropes in order that his barbs can find their proper target. But Shyamalan's trilogy seems to be more ambitious, in giving the audience superheroes whose powers and talents are difficult to assess.

Of course, a lot of metaphenomenal films have hinged on the ambiguous nature of the marvelous. Sometimes there's no doubt that marvelous entities exist, but there are some doubts as to the true nature of said entities. ("It's a cookbook!") At other times, the marvelous can be given a "realistic" explanation, though in many such works, ranging from Gothics to detective stories, the explanation is not much more realistic than the outright marvelous thing being suggested, thus resulting in the domain of "the uncanny." In both UNBREAKABLE and SPLIT, Shyamalan keeps his apparent marvels within a twilight realm that might transform into the uncanny. Does David Dunn really lose his apparent invulnerability when faced with his "kryptonite," or is that all part of a childhood complex? Does Kevin Crumb, in his monster-like persona of "the Beast," really possess super-strength when he's seen bending iron bars, or is he just doing what a lot of above-average strongmen can do, fueled by his own psychosis? The merely human witnesses to this marvels-- Dunn's son Joseph, Kevin's former captive Casey-- cannot be entirely sure that they have seen wonders, and so neither can the audience be sure. The only character who remains resolutely sure of the existence of modern-day superheroes is Elijah Price, and he's a madman who's killed hundreds of people in his quest to become a true super-villain. But his villainous name, "Mister Glass," constantly reminds the audience that his belief in the strength of superheroes may be a fantasy of compensation, because that strength is something that his eternally fragile body cannot ever possess.

Nevertheless, long after Price/Glass has been institutionalized, Dunn's desire to be a protector of the weak eventuates in his crossing paths with Kevin Crumb, who has recently begun preying on female victims once more. There's a brief "battle of the titans," but the forces of the ordinary world intrude on the mortal combat, in the force of Dr. Ellie Staple and a contingent of policemen. Both the would-be hero and his monstrous foe are consigned to the same asylum as the villainous Glass, and Staple claims that the only way the three of them can escape eternal imprisonment is to recant their respective belief-systems.

Since Shyamalan himself has cleverly set things up so that the audience cannot be 100 percent sure of  what they've seen, any more than can the diegetical witnesses, the audience of GLASS hangs in a position of uncertainty. Have they indulged in beliefs about the marvelous simply because they, like the characters, want to be removed from the world of the ordinary?

Staple seems, for a time, to possess the "right reading" of the escapist superhero fantasy. However, it wouldn't be a film by M. Night Shyamalan if there wasn't at least the possibility of an ending with a twist, or even a "double twist." The mechanics through which the writer-director realizes the surprise. however, are less important than the implied ethical: that the people preaching "the reality principle" may have a vested interest in controlling the reality of everyone else.

Whereas SPLIT was a little too much James MacAvoy for me at least, his florid Kevin character is nicely counterpointed by the underplayed character of  Bruce Willis's David Dunn, who remains resigned to his grim fate from the first, even when he sacrifices himself to save innocents who arguably don't deserve being saved. Samuel L, Jackson's Elijah is in some ways the moral center of the film despite his heinous acts, for he's willing to perpetrate evil deeds in order to banish a greater evil: the false belief in human limitations. Thus, GLASS may be the first film in which a hero, a villain and a monster share center-stage as part of the core ensemble. (Prior to this, the biggest admixture of persona-types I'd ever seen in a single film would be CHRONICLE, where its two co-equal stars are what I term "monster" and "demihero.")

All this, and a pretty good super-fight at the conclusion.

Posted by Gene Phillips at 2:01 PM
Email ThisBlogThis!Share to TwitterShare to FacebookShare to Pinterest
Labels: combative dramas, the marvelous