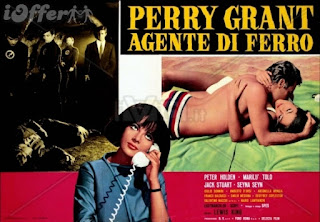 
The most amusing alternate title for THE BIG BLACKOUT is seen in the ad above, which translates to "Perry Grant, Agent of Iron." True, as played by two-time actor Peter Holden, Perry Grant does get into some decent punch-ups, but he's only average-looking for this type of character, and the descriptor "iron" suggests someone as powerful as, say, Gordon Scott. All that said, I used the title THE BIG BLACKOUT because it denotes the only metaphenomenal content of the movie: that the villain, a schemer named Josipovici, plans to conquer the world using a device able to black out whole cities. Not surprisingly, the film wastes no money showing us the device in action, and instead wears out its meager budget sending Perry around to various parts of Rome, looking for evidence of counterfeiting and romancing a couple of comely women, principally Marilu Tolo. The actresses serve as little more than window-dressing, and the few romantic interludes are tediously shot. 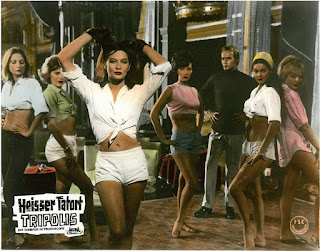 In contrast, though Doug Gordon, the titular character of PASSWORD is not any more interesting than Perry Grant, and though the movie's plot is even more loosely organized (something about arms smuggling), the filmmakers at least give the male viewer plenty of pulchritude. Not one but two famed Eurobabes, Helga Line and Rosalba Neri, liven up the dull action. Neri draws a gun on Gordon, but he disarms her and ties her up until she tells him what he wants to hear. Line, apparently an agent for Russia, has a fun moment when an enemy gets the drop on her, and she blasts him with a handheld pocket laser.

That laser, by the way, is the only element in the film that qualifies as marvelous. Gordon uses no gimmicks, though at one point a henchman of the bad guys tries to off the hero with a halfway interesting weapon: a seltzer bottle that sprays corrosive acid. In a scene toward the end, one of the villains-- a woman in a wheelchair who's not actually crippled-- kills one of her foes with an umbrella that shoots a spear into the guy's back. Oh, yeah, and the wheelchair-woman puts both Gordon and Line's character into death-traps, and Gordon escapes his trap with ludicrous ease.

Going by IMDB credits, Roger Browne apparently made this cheapie between two of his somewhat better Eurospy outings, his "Superseven" films.

Posted by Gene Phillips at 2:46 PM
Email ThisBlogThis!Share to TwitterShare to FacebookShare to Pinterest
Labels: combative adventures, the marvelous