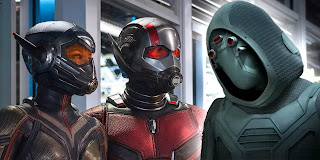 
In my review of the 2015 ANT MAN, I expressed the hope that the writers of the next film in the series would "expand upon his rather two-dimensional personality." But though the same director came back for the sequel, the only writer who also participated in the first film's script was main actor Paul Rudd. And, since Rudd's Ant-Man is still the same "self-effacing dork" whom I didn't like in the previous entry, that must mean that Rudd is perfectly within his comfort zone.

Some things are the same: once again former felon Scott Land gets drawn into the schemes of Henry Pym (Michael Douglas), the first Ant-Man, and his daughter Hope (Evangeline Lilly). However, now it's been two years since Lang used the Ant-Man suit to help the wrong group of Avengers in CAPTAIN AMERICA CIVIL WAR, and so he's  been sentenced to house arrest since being apprehended. This allows him a lot of daddy-time with his little daughter Cassie, but his allegiances have caused the government to put out warrants on Henry and Hope. Why did the government give Lang such a minor sentence, yet get all hardcore on two scientists who didn't even participate in the alleged criminal activity? Such questions are of course left blowin' in the wind.

However, like Hamlet Lang has "bad dreams," one of which has to do with a previous visit to the microcosmic "quantum realm." The microverse plays a big part in the forrthcoming AVENGERS: ENDGAME, but in ANT/WASP it just inspires Lang to dream about Janet Van  Dyne-Pym, who was lost years ago and presumed dead. He contacts Henry about the dream, and this spurs Henry and Hope to decide that Janet (the first Wasp, by the way) is still alive in the quantum realm, and they need Lang to help them, even if it means getting in dutch with the Feds for breaking house arrest.
However, the scientists need lots of special hardware to make their quantum tunnel. Perhaps inevitably, there are competing interests for that hardware, ranging from an arms dealer and his crew to a mysterious new villainess, "the Ghost" (derived from a male foe in the IRON MAN comics).

In contrast to the first film, which exploited a lot of the original comic's charm in showing ant's-eye views of the human world, director Peyton Reed and his people opt for a "Fast and the Furious" vibe, alternating improbable heist-scenes with various car-chases and fistfights-- which are, for the most part, well done though not superlative. In a very loose reworking of the Ant-Man/Wasp partnership, Henry Pym gives his daughter Hope equipment that makes her into the new Wasp. Whereas in the comics Henry was the "straight man" and Janet Van Dyne was the funny one, the movie series reverses this, making Hope-Wasp a rather dull "straight woman" who constantly rags on Scott Lang's dorkiness. The Wasp gets as many good kickass fights as her male partner, but somehow she still comes off as an even flatter character than Lang.

There's a lot of the trademark Marvel humor, and a predictable rescue of the missing mama (played by none other than Michelle Pfeiffer). Once again, the villains are one of the weakest links in a Marvel superhero film. The Ghost (Hannah John-Kamen) is supposed to be a pitiable opponent, because she suffers perpetual agony due to the scientific experiment that gave her ghost-powers, but at no point does she seem to be anything but another "scientist's daughter seeking to avenge her daddy." A secondary quasi-villain is provided by Bill Foster, a quarrelsome former colleague of Henry Pym, but his character is vague and chimerical, changing to suit the needs of the script.

ANT MAN AND THE WASP is at least a good time-killer, but I wouldn't mind if it was the last of this particular series.