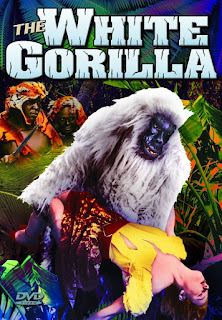 
"We have no right to the jungle-- it belongs to the natives, the birds, and the animals who have been here since time began"-- Collins, the huntsman who kills the titular ape.

THE WHITE GORILLA, though indisputably a bad film, has a curious place in the admittedly limited history of American jungle films. GORILLA's recycling of silent-film footage from over 15 years previous made it easy for the casual viewer to get a look at scenes from the obscure 1927 serial PERILS OF THE JUNGLE, starring Frank (TARZAN THE TIGER) Merrill. Purportedly the whole serial survives in the UCLA Archives, but that's not exactly a commercial venue. From the material excerpted, I can't even be sure that PERILS qualifies as a metaphenomenal film. though there is a white jungle boy who's seen commanding his pet elephant in a couple of scenes. (The narrator says he has "mystic powers," but I tend to doubt it.) Merrill's character Bradford was almost the central hero of PERILS, though here he's demoted to the status of "support character" by the 1945 frame-story about the White Gorilla.

H.L Fraser wrote but did not direct PERILS, and years later, he cannibalized the silent serial into a new feature, both written and directed by him. He directed a lot of B-films, mostly westerns, over the years, but probably most are not recognizable, even to modern B-film fans. His credits as a writer are a little more distinguished, as he contributed to the scripts of the 1943 BATMAN  and the 1944 CAPTAIN AMERICA.

Even in 1945 audiences probably would've reviled a B-film interspersed with grainy, undercranked footage, so it seems unlikely that Fraser and his fellow producers were doing anything but whipping out a quickie product that didn't cost them very much. The new scenes compensate for the silent footage by assigning an omniscient-narrator function to Collins (Ray "Crash" Corrigan), who's first seen arriving at a trading-post in some part of the African jungle. He's survived a lot of harrowing incidents, some of which relate to scenes from PERILS, though his most recent encounter is with the fabled White Gorilla. By the emphasis Fraser places upon the albino ape, it implicitly becomes the new focus of the whole narrative, to which all of the other actions are subordinated. Collins is certainly not a strong enough character for any viewer to invest any interest, though some modern fans have been amused that the same actor playing Corrigan also portrays, at least in some scenes, the White Gorilla.

We're told that the white beast is an outcast from its gorilla-tribe by virtue of its unusual coloration, but no one in the frame-story seems to comment on this assertion. However, just to give the White One something to do, a big black gorilla shows up from time to time and has desultory fights with the albino. Fraser seems to be building up to a major combat between the animals, but in the end he changes horses in mid-stream, having the brute try to make time with a lissome human girl, at which point Collins shoots the outcast dead. Then, as a further odd touch, his black-furred enemy mourns the fallen ape and tries to "bury" him with branches.

As shown by the film's closing lines, Fraser does try to evoke the mysteries of the jungle, albeit in very predictable ways. Still, how often do you get a B-level jungle-film in which the narrator claims that the jungle ought to belong to its original owners?


Posted by Gene Phillips at 3:17 PM
Email ThisBlogThis!Share to TwitterShare to FacebookShare to Pinterest
Labels: astounding animals (u), the uncanny