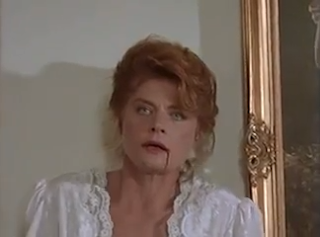 
Though there are a lot of naturalistic psychos in action-adventure films, the one in DIPLOMATIC IMMUNITY is a little more layered than most, thus making him an interesting topic for this blog.

The plot of IMMUNITY, in which a tough American invades a foreign country to avenge his slain daughter, sounds a lot like 2008's TAKEN. And the source-novel for the movie, Theodore Taylor's 1987 THE STALKER, has even more resemblance to the Liam Neeson flick, since in the novel the avenging hero goes after the villain, a West German diplomat, across "Germany, Denmark, and Sweden," whereas the film confines the action to one location, Paraguay. I assume that Taylor's original novel is the reason that villain Klaus Hermann is a bit more complex in the "perilous psycho" department.

That said, the screenplay and director Peter Maris get some mileage out of alterations that probably were rooted in cutting costs. Career military man Cole (Bruce Boxleitner, who's not a monolithic enough actor to fit this subgenre) has already lost his wife to cancer, and he's fiercely protective of his grown daughter Ellen, whom he claims is the spitting image of her mother. Before he meets Ellen's impending date Klaus, Ellen tells him not to be suspicious of the German youth: saying something like, "Not every German from South America is an ex-Nazi!" Ellen meets Klaus and they leave Cole behind, glowering. That same night, Klaus loses his pretense of cool. Not only does he rape and kill Ellen, he takes sadistic pictures of her before his local handler, to whose diplomatic office Klaus is attached, takes him away. The law apprehends Klaus but is forced to release him because he's immune to immediate prosecution. Authorities give Cole no real hope for extradition, and so down he goes to Paraguay, to avenge his darling daughter.

Though Cole is the star of the show, he's never as interesting as the Hermann family, which seems somewhat modeled after Freud's reading of HAMLET. In fact, the matriarch of the family is even named "Gerta," which has a strong resemblance to Shakespeare's "Gertrude." However, whereas Gertrude only married the brother of her late husband, Gerta seems to have directly contributed to making her son Klaus into a scopophilic pervert. Once the chief security man Stefan returns Klaus to his loving mother, she's less angry about his committing murder than the fact that he "wastes" himself on such women. Of the three scenes that involve Gerta (Meg Foster) and Klaus (Tom Bresnahan), they continually suggest that Gerta has on some past occasion seduced her son, although she sometimes keeps him at a distance by slapping or kicking him. In one scene, she comes to his room, and, thinking that Klaus is on the other side, tells him that he's never been able to hide from her before.

Though the movie doesn't quite say that the incestuous relationship is also sadomasochistic, this is suggested when Cole tries to get at Klaus by tracking down his mistress Teresa. Teresa initially disbelieves Cole's accusation because she's always found him to be a submissive-- suggesting that Teresa is a mother-substitute. Nevertheless, in this world every masochist hides a sadist, and when Klaus turns on Teresa, she becomes Cole's ally. To round out the HAMLET parallel, Klaus is also jealous of Stefan's relationship with Gerta, and one scene does show Gerta making out with Klaus. Gerta asserts that Klaus resents Srefan for taking his (Klaus's) place. This line suggests that Stefan is a father-substitute, even as Freud considered Claudius a daddy-doppelganger, so that the implication is that Klaus expected to be a de facto "husband" to Gerta once the patriarch passed. An additional interesting detail is that the deceased Hermann patriarch, though not definitely an ex-Nazi, earned his wealth and diplomatic prominence through munitions, and Gerta only gained her vaunted social position as Hermann's wife because she had been a "stripper" and so was good at manipulating men. For a closing touch, Gerta is killed and before he dies, Klaus takes a picture of her dead body just as he did with Ellen. Ah, those perverse Germans!

None of Cole's explosive attempts at vengeance are as interesting as the weird Hermann family, though things do blow up pretty good, and the film offers a nice sampling of familiar faces, like Billy Drago, Matthias Hues, Fabiana Udenio (as Teresa), and Robert Forster. Forster's role is sociologically interesting, for Cole and Forster's character served together in Vietnam, but the latter soldier was guilty of killing Vietnamese prisoners. This would seem to have no real pertinence to the main story, but maybe in the original novel it served to make Cole look less like "the Ugly American" by comparison.