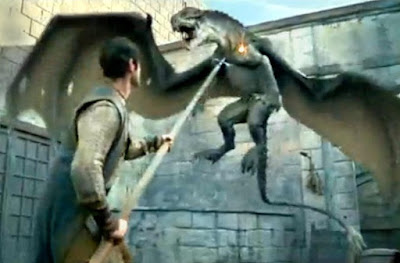 Over the past forty years it’s become common for authors to add high-fantasy elements to the generally naturalistic folklore-tropes of the Robin Hood mythos. Not many of these combinations have displayed high quality with their high fantasy, and BEYOND SHERWOOD FOREST is no exception, being nothing more than a decent formula-fiction. But this SYFY Channel movie is exceptional in two other ways: unlike most such efforts, it actually has a coherent plot rather than a lot of running around, and it’s one of the few Robin Hood films in which the archer and his romantic interest Maid Marian are equals in narrative emphasis.

In fact, Marian (Erica Durance) gets a little more backstory here than the Sherwood hero. She’s a feisty maiden who in younger days shared a little romance with a younger version of “Robin of Locksley,” but her father started keeping her cooped up (dare I say “in durance vile?”) for the purpose of marrying her off to the reigning (and much older) king of Austria. In her confinement, though, Marian practices with the quarterstaff to learn self-defense, and then bolts for the forest, disguising herself as a man.

The archer (Robin Dunne), for his part, has his traditional story whittled down to make room for the fantasy-plot. Young Robin of Locksley witnesses his father and two others being attacked by a winged demon. The creature slays one man and flies off, at which point the second man, name of Malcolm, slays Robin’s father. The boy runs off to the forest, assuming no one will believe him about the prestigious Malcolm, who as a result of the deaths becomes the new Sheriff of Nottingham. In the ensuing years Robin teams up with other forest-outlaws and starts the legend of Robin Hood. It’s at this point that Robin and Marian cross paths once more—as well as crossing quarterstaffs in a meet-cute reprise of the famous duel between Robin Hood and Little John upon a river-bridge.

Meanwhile, Malcolm has captured the demon-creature and has compelled the beast to attack his Sherwood foes. After an assault results in the death of Friar Tuck, Robin, Marian, and three other outlaws seek the Dark Woods to learn the secret of the demon, and to find a way to depose the evil Sheriff, who has long-range plans to gain power over the regent Prince John. (John and another familiar Robin-foe, Guy of Gisborne, are demoted to minor threats in this telefilm.)

Though there’s nothing strikingly original about the Sherwood Team’s venture into Tolkienian territory, the script invests some decent drama in the plight of the demon-creature. In the Dark Woods she is Alina, a human-looking “faerie,” but because she’s the result of her mother mating with a mortal man, Alina is cast out of faerie society. When she ventures into the mortal realm, sunlight causes Alina to morph into the winged demon. The only solution is to take away Alina’s immortality with a special plant, but that will mean the death of the mostly innocent marauder.

There’s some decent drama and occasional comic bits, so BEYOND, while never remarkable, offers a reasonable thrill-ride. Robin Dunne is not a very good Robin Hood, but Erica Durance makes a gutsy Marian, while Julian Sands chews the scenery nicely as the fiendish Nottingham nogoodnik.

Posted by Gene Phillips at 1:01 PM
Email ThisBlogThis!Share to TwitterShare to FacebookShare to Pinterest
Labels: combative adventures, the marvelous