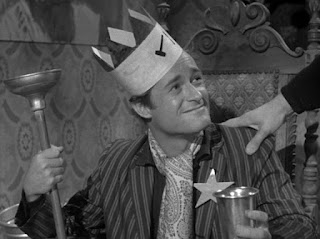 
Of all of Roger Corman's directorial works from the fifties decade, A BUCKET OF BLOOD is probably the most well-liked film. It certainly has its fair share of charms, ranging from a witty script by Charles B. Griffith and a captivating performance by film-fan favorite Dick Miller as the witless psycho-murderer Walter Paisley.

Griffith almost certainly knew of earlier films about madmen making murdered corpses into wax statues, since HOUSE OF WAX, the quasi-remake of 1933's MYSTERY OF THE WAX MUSEUM, had appeared in theaters six years previous. But in both of these horror-films, the wax-sculptors were obsessed with the artistry of their endeavors. In contrast, Walter, a lowly busboy at a cafe, is a wannabe who has no artistic talent or ambition. Influenced by the high-flown, art-obsessed yammerings of the cafe's beatnik clientele, Walter has delusions of attempting sculpture in order to win the heart of his female colleague Carla, whom he's longed after for years, and who is also desired by their mutual employer, the cafe-owner Leonard (not one of the beats, though he constantly wears a beret to imply his affiliation to their artsiness). Leonard is in essence a slightly more "hip" version of Walter, in that neither man cares about art, even in the pretentious manner of the beatniks, but only with the filthy lucre that follows artistic success.

Walter, nebbish that he is, accidentally kills both a neighbor's cat and an obnoxious undercover cop, and his idea of coating them in wax originates as a method of concealing the bodies. However, he gets the inspiration of showing off the clay-coated feline off to the cafe-attendees as if it's a genuine sculpture. The adulation Walter receives-- not least from Carla-- is as much of a drug as those the beats utilize, and thus he puts the body of the waxed-up cop on display as well. From there it's a quick progression to killing people on purpose and then putting them on display-- though, because Walter is such a doofus, his handiwork is found out in jig time, and he ends up paying the ultimate price.

The satire of the West Coast beatnik scene, and of pretentious artsiness generally, is somewhat repetitious, and there's no sense that Griffith or Corman knew anything but authentic Beat art like that of Ginsburg and Ferlinghetti. But Dick Miller's performance anticipates the horror film's increasing dependence on the trope of the "nerd gone wild."
Posted by Gene Phillips at 3:38 PM
Email ThisBlogThis!Share to TwitterShare to FacebookShare to Pinterest
Labels: bizarre crimes (u), perilous psychos (u), the uncanny