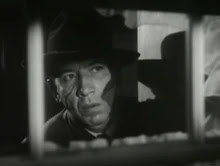 This 1945 B-film was the first of four produced by RKO Studios. Prior to DETECTIVE, Ralph Byrd was the only actor who had portrayed the famed comic-strip character. For whatever reason, Byrd was unavailable this time, so the studio cast Morgan Conway for this film and the next, DICK TRACY VS. CUEBALL Reportedly exhibitors complained to RKO that audiences didn't accept Conway, after which Byrd was hired to star in the series' final two films.

The plot concerns hardened criminal Splitface (Mike Mazurki), so named because he bears a huge scar bisecting the sides of his face. Splitface gets free of prison and goes on a rampage, slashing up an assortment of citizens. His motive is revenge upon the jury members who sent him up, but a confederate, a psychic grifter named Starling, complicates things by extorting some of the intended victims. Starling seems mildly psychic since he goes into trance and foretells his own death, but the vibe isn't strong enough to sustain the uncanny, though said vibe is supplied in spades by the imposing scarred visage of the hulking murderer Splitface. In addition, there's some business about the daughter of a nightclub owner, played by a not-yet-famous Jane Greer, and there's also a comic mortician named Deathridge.

In contrast to the serials, the RKO flicks incorporated a fair number of supporting characters from the Chester Gould strip-- Junior, Pat Patton, Chief Brandon-- though only the hero's neglected girlfriend Tess Trueheart (Anne Jeffreys) gets much characterization. As the dogged detective, Morgan Conway is an okay substitute for Ralph Byrd, and he acquits himself well in the concluding fight-scene with Splitface.

Conway's two outings as Dick Tracy were the only outstanding roles in his short career, and although director William Berke accrued a much longer (if equally journeyman) set of credits, DICK TRACY DETECTIVE is probably the only film on his resume that even old-time film-buffs would remember, though I found THE MARSHAL'S DAUGHTER mildly interesting. Of the films on Berke's resume, none are visually memorable, but maybe Berke tried to up his game somewhat for this flick, because DETECTIVE makes nice use of noirish shadows and atypical camera angles.