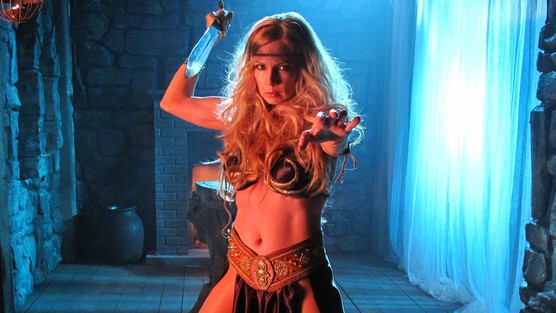 Since Edgar Rice Burroughs' pioneering Martian hero did get a creditable (if not exceptional) adaptation in 2012, I can't very well carp that this Asylum production deprived viewers of a definitive adaptation of the John Carter mythos. I can complain that it's a generally mediocre film, and the best I can say of it is that it's far from the worst to come out of this studio. One source claims that Disney had announced their adaptation even back in 2009, which would explain the Asylum people becoming interested in the property, though I assume they actually had to pay for the rights to Burroughs' story, which is a sort of accomplishment in itself.

Antonio Sabato Jr. is at least a reasonably impressive hero-type here. His version of John Carter is a U.S. army sniper stationed in Afghanistan, and after he's injured in combat with a drug-merchant named Sarka, Carter's nearly-dead form is utilized by army doctors for a teleportation experiment. Sounds pretty counter-intuitive to use a half-dead guy for an experiment, but that's the Asylum for you. FWIW, in the original novel Carter is in danger of death before he gets magically transported to Mars, so I suppose that's what the writer-director was riffing on. (Also, because current science no longer believes life on Mars possible, one scientist notes that they're not sending Carter to THAT Mars, but to some other planet they've given that name.)

On Mars Carter is healed of all his wounds but nearly naked. He also discovers he's stronger than normal thanks to the gravity of Mars. He's spotted by his future love Dejah Thoris (Traci Lords) but she leaves him to his fate-- which turns out being captured by the tusk-mouthed savages known as Tharks. (In the books the Tharks have four arms; no surprise that this film doesn't even attempt this effect.) Carter is given a potion that allows him to talk Martian, and he learns about the long history of conflict between the Tharks and the human Martians, represented by Dejah and her people. Dejah is also captured by the Tharks and, despite a rough first meeting, eventually she persuades Carter to help her save the planet. As in the books, the planet's atmosphere is only maintained by artificial installations, and if they're destroyed, so does the populace.

The script is pedestrian and the effects-- mostly big CGI beasts seen from a distance-- are paltry. For no good reason the writer injects another Earthman, the drug-merchant, apparently just so that Carter can fight another guy with super-strength-- though their actual fight is forgettable. The villain's name, Sarka / Sab Than, sustains a little continuity interest simply because in Burroughs, "Sarkoja" is one of the primary villains of PRINCESS OF MARS, though she's actually a scheming female Thark, while Burroughs' "Sab Than" is a minor secondary antagonist.

The film's only saving graces are Sabato and Lords. It's interesting that while Burroughs' Dejah Thoris is no kind of warrior princess, both this film and the 2012 iteration make her into a sword-mistress. Sadly, though Lords looks pretty good in the role despite her age, she doesn't get to do anything but stab a small critter with her blade. From what I can tell, as of this writing the role of Dejah seems to be Lords' last role of any significance.