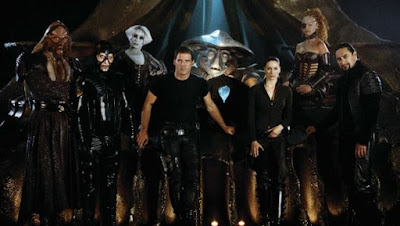 Following up on the plot-threads from Season Three, the steely Peacekeeper Grayza becomes the Moya crew's new pursuer, though the writers attempt to undermine her slightly by having her accompanied by a lieutenant who's secretly allied to Scorpius. The latter has taken refuge on Moya for reasons I chose to forget, and since I've already expressed my distaste for the character, I'll skip over his dubious participation as a regular with the scruffy protagonists.

Old three-eyed woman Noranti (Melissa Jaffer) is a far more welcome addition to the cast, and though she's played for humor, she does to some extent compensate for the loss of "den mother" Zhaan. The fourth season also adds yet another new character to the overburdened crew, Sikozu (Raelee Hill), who is another scientist and somewhat duplicates the functions of Jool. (The scripters solve this problem by simply not having the two characters around one another most of the time.) She's also a key element in yet another involved plot involving Scorpius and the race who spawned him, the Scarrans, but this story-line, perhaps because of the Scorpius presence, I found less than engrossing.

One major plotline is that Aeryn remains pregnant for the whole season, though she would have to wait until the two-part telefilm to give birth to her baby by John Crichton. The latter half of the season subjects Aeryn to considerable torments when she's captured by Scarrans, who have become ever more interested in the possibility of using wormhole technology to invade Crichton's home planet. As for the other members, by this time there aren't a lot of surprises with them, which may be one reason the writers kept injecting new crew-members. Thus the better episodes tend to be the ones that stress the ensemble rather than particular character-arcs.

The most ambitious arc is a three-parter involving the Moya crew returning to Earth. "Unrealized Reality" forces Crichton to listen to an alien being's lecture on the perils of time-travel and alternate worlds. Actual time-travel takes place in "Kansas," wherein Crichton and friends end up on Earth in 1985, and is followed by the third part, "Terra Firma," in which Crichton and the others visit the "current" time from which Crichton departed, though by the story's end the Moya crew must return to space. "Firma" later gets some further elaboration in "A Constellation of Doubt," when Moya manages to tap a broadcast from Earth, chronicling the planet's reaction to its first contact with aliens, complete with "celebrity interviews" with said aliens.

All four episodes depend on one's familiarity with the characters, but "Kansas" is the most ambitious, for all that it riffs on the 1985 film "Back to the Future." In the movie, Marty McFly accidentally altered time's true course by alienating the affections of his future mother to himself in place of his actual father, thus forcing Marty to correct the problem by bringing his parents together and insuring his birth. Crichton has similar problems with validating his existence, though in 1985 he already exists as a teenager, moody and rebelling against the authority of his father. The senior Crichton is in danger of dying prematurely if the Moya crew can't prevent him from being assigned to the doomed Challenger expedition, and this leads to some amusing sequences as Crichton's alien allies are forced to pretend they're humans dressed up for Halloween. And just to keep the incest angle in, Chiana-- whose liking for Crichton has been frustrated by his loyalty to Aeryn-- finds a way around that impediment by seducing Young Crichton. Granted, Chiana's not exactly the "mother" type, but she's certainly more experienced than the teenager, and this sequence, not technically necessary for the plot, smacks of "shipping" characters who wouldn't otherwise get together.

The final episodes of Season Four are fairly dark, being dominated by Aeryn's abduction and the Scarrans' plans for Earth. This plotline would be concluded in the telefilm, though I'm sure any number of subplots were left hanging by the series not receiving a full final season.

Posted by Gene Phillips at 2:50 PM
Email ThisBlogThis!Share to TwitterShare to FacebookShare to Pinterest
Labels: combative dramas, the marvelous