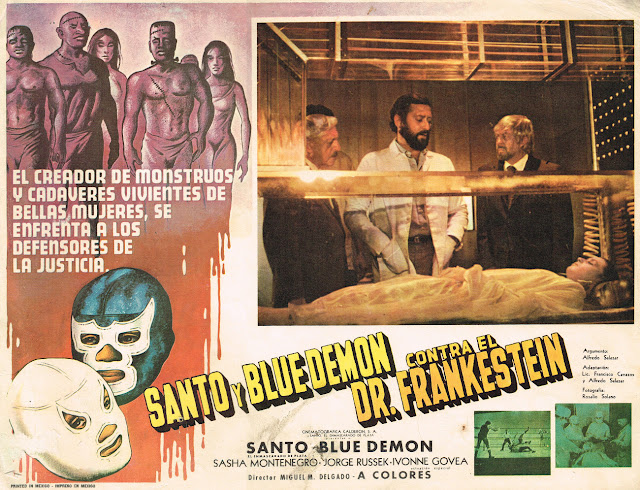 Though none of the Santo films are what I'd generally call "good movies," a number of them are at least spirited nonsense. So after watching this one, I searched my brain for a way of conveying how deadly dull this Silver Mask opus was. I came up with this:

"It's the first luchador film I ever saw where the ring-fights were better than the ones in which the wrestlers are fighting real criminals and monsters."

It's bad enough that the Frankensteinian doctor, supposedly the grandson of the original (yeah, if he lived in the early 20th century, maybe), sports the first name "Irving," and that he's NOT played for comedy. On top of that, Irwin isn't content with cobbling together his own hulking piecemeal monster-- a big black dude named "Golem." He's also abducting pretty young girls for the purpose of using their brains into the head of his dead wife. But after the film's first 20 minutes he forgets all about this gambit, preferring to unleash some of his brain-dead female victims on the public. Moreover, he becomes obsessed with beating Santo, even though it seemed that if the mad doctor didn't attack the wrestler and his partner Blue Demon, the heroes would never have had the first clue as to where to find the villain.

The few action scenes outside the ring are boring set-ups, and the only time the heroes fight Golem is in an end-sequence in the ring, for which Irving conceals the monster's skin-color so that he won't be recognized (?) The two leading ladies are cuter than average, and there's one nice scene in which Golem walks into a hail of police gunfire. The mad doctor spoils the scene somewhat by claiming that the monster can survive gunfire because he's wearing bulletproof clothes-- immediately begging the question as to what would happen if the terrified cops just shot Golem in the head!

Posted by Gene Phillips at 2:01 PM
Email ThisBlogThis!Share to TwitterShare to FacebookShare to Pinterest
Labels: combative adventures, the marvelous