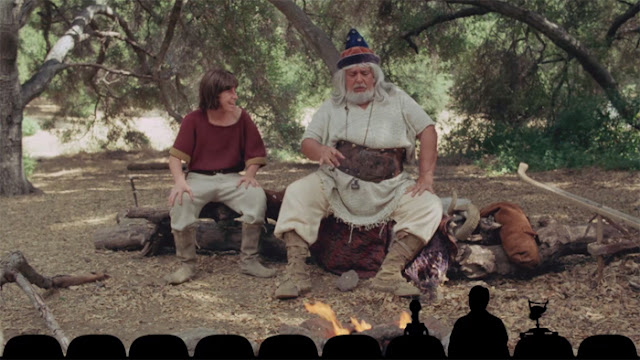 As the above still indicates, I watched a MST3K version of WIZARDS II for this review. On occasion I'll find the bot-chatter too distracting from the actual film, but in this case there wasn't any dissonance. WIZARDS II is making fun of itself quite as much as any routine on the Satellite of Love.

The only connection between this film and the original WIZARDS  is that producer Roger Corman ostensibly made money with the first one, and so he greenlighted a "sequel" in name only, directed by Corman's long-time collaborator Charles B. Griffith, who co-wrote the script with one Lane Smith. (Lead actor Mel Welles had also co-scripted an earlier film with Griffith, 1965's SHE BEAST, so I would hazard that Welles might have contributed some of his own lines to the mix.) Not that anyone should be proud of the WIZARDS II script.

I find myself debating over which WIZARDS was worse. The Ed Naha script for the first film was just as sloppy as the Griffith-Lane narrative, in that both are content to recycle fantasy-tropes at their most stereotypical level. But in Naha's story, there was at least the germ of a Freudian fantasy-- Bad Mommy and Bad Daddy kill Good Daddy, after which Bad Daddy tries to make it with the Good Daddy's Good Daughter. The Griffith-Lane script is designed to do nothing but mark time, giving its heroes a collection of empty quests to complete before the film comes to an end.

Griffith may at least have sought to duplicate one aspect of WIZARDS I. The first flick focuses on the avuncular relationship of a wise old Han Solo figure to a naive young Luke Skywalker character. WIZARDS II spends most of its time on elderly magician Caedmon (Welles) tutoring the Chosen One Tyor (Bobby Jacoby) in magic, so that together they can overthrow Loki, Donar, and Zarz, the three tyrant-wizards who rule the land. (Why give just one wizard a nonsense-name while the other two get the cognomens of Earth-gods? Who knows?) Caedmon converts Tyor to the cause with nearly no argumentation at all, though, being that this is a Corman film, Caedmon may have whispered to the youth that he'd get to see a lot of female booty on the quest.

Not all of the magicians' allies are female. One is a master swordsman, The Dark One (top-billed David Carradine in a really bad wig), and there's another guy, Erman, who appears for one sequence and then vanishes. However, the magi also get aid from a swordswoman named Amathea, played by Lana Clarkson, who essayed a heroine with the same name in an earlier Corman-production, BARBARIAN QUEEN. Possibly Clarkson was cast just so that Corman could once again plunder old footage from that film in order to save bucks on WIZARDS II. Another ally is a dancer (Susan Lee Hoffman), whose big moment consists of breaking a guard's neck with a leg-lock. In addition, Caedmon and Tyor also encounter a trio of captive ladies held by a demoness, and a hot young henchwoman of Donar's tries to seduce Tyor (a motif which may have been borrowed from WIZARDS I).

There's a lot of fighting, with both swords and sorcery, but it's pedestrian at best, though Clarkson comes off best-- certainly better than Carradine, who looks bored even in the battle scenes. As noted before, though this is isn't a full-fledged comedy, the script is full of tongue-in-cheek anachronisms and clumsy attempts at double entendre, as when Tyor threatens the hot henchwoman with a sword, saying, "Show me where the sword is, or I'll skewer you like you've never been skewered before."

WIZARDS II does have the edge over the previous film in that Two has more familiar faces with which to conjure. Bobby Jacoby, veteran of various teen comedies, was at least a more competent performer than Vidal Peterson, and Welles at least commits to his silly role better than did Bo Svenson. The script brings together, albeit briefly, two actors best known for their villains: Sid Haig of BIG BIRD CAGE fame, and Henry Brandon, who rendered the best portrait of Sax Rohmer's devil-doctor in THE DRUMS OF FU MANCHU. (WIZARDS II was also Brandon's final film.) But since the jokes aren't funny and most of the action is boring, I guess that Naha's WIZARDS wins the contest, such as it was.