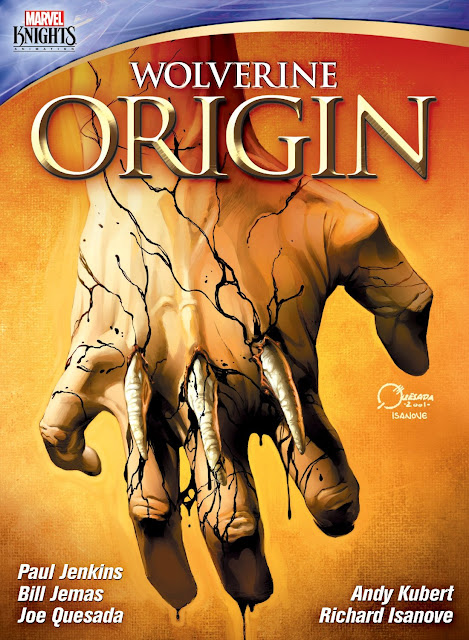 I won't relate any plot or characterization details of this motion-capture animated video, since this is a broadly accurate translation of the 2001 Marvel graphic novel of the same name, whose content I discussed here. What I will discuss are the reasons why even a broadly accurate replication of a mythic story may still fail the acid test for mythicity.

ORIGIN is on balance a failure as myth and as entertainment, but there are a few good things about it. The first is that because the animated project existed, I investigated its source material before watching it and was extremely impressed with the graphic novel. There are two bonus interviews on the DVD that gave me a little more detail on the genesis of the GN, particularly with respect to the fact that artist Adam Kubert produced the lushly detailed artwork through Photoshop tools rather than with traditional pencil or brush. But ORIGIN's main strength is as a negative example of mythicity.

I've often noticed that an accurate adaptation of a mythic story may not be mythic. For instance, I would probably judge Conan Doyle's original HOUND OF THE BASKERVILLES to be a myth-tale, but my favorite cinematic adaptation, the 1939 Fox Studios movie, rates only as fair.

The problem I perceive is that those media that allow the reader to "peek in" on the thoughts of the characters allow the author to express a greater amount of symbolic discourse than do those media that don't allow such introspection. That said, the latter types of media-- paintings, lyric-less music, and both animated and live-action versions of film and TV-- can express mythicity in different but still impressive ways. But most adaptations simply attempt to reproduce what one might call the "peak experiences" of a pre-existing narrative, often excising the "valley experiences" that allow characters more opportunity for meditation and reflection. The lack of introspective "valley moments" in the 1939 HOUND film is the thing that keeps it from emulating the mythic content of the Doyle narrative.

WOLVERINE ORIGIN is even more egregious. "Motion capture" in this type of animation consists of filming static comic-book art and reproducing the "high points" of the story. This doesn't always mean only the action-sequences. However, even relatively sedate visual sequences, such as the way Rose first comes to work at the Howlett estate at the beginning of both versions of ORIGIN, are capable of communicating the "valley experiences" of interior reflection. But the motion-capture technology usually zooms past any such opportunities in favor of lots and lots of "peaks."

And that's all I have to say about the ORIGIN video. It may capture a sense of the motion of Adam Kubert's art, or sections thereof, but it's a empty shadow-show, whose fragmented content reproduces none of the organic wholeness of the source material.

Posted by Gene Phillips at 10:16 AM
Email ThisBlogThis!Share to TwitterShare to FacebookShare to Pinterest
Labels: combative adventures, the marvelous